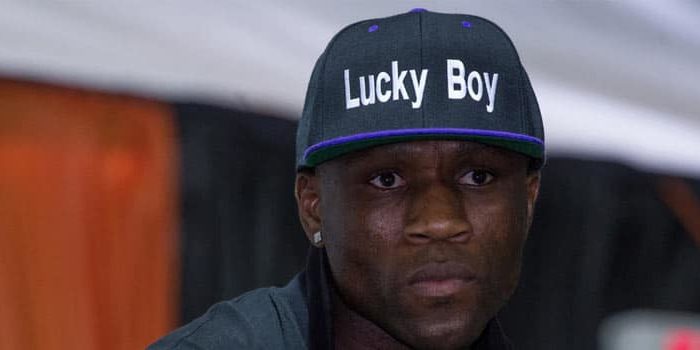 The neighborhood kids pour out into the dusty roads of Lagos, Nigeria, skinny and frail. Many have no shoes. Many have no homes. Their tattered clothes hang from their arms and shoulders.

They kick around a small blue ball to fill the idle afternoon. They also carry a familiar squint, as if they’re sizing up everyone who walks by them like prey.

Wale “Lucky Boy” Omotoso knows the look. He knows the kids, too. He should. He was one of them.

At the age of seven, American kids are introduced to Super Mario Odyssey video games.

At the same age, Wale knew what a shriveled corpse looked like on a Lagos side street, lying there rigid, almost devoid of skin, with its bloated stomach and pitted by burrowing insects.

“I saw it all of the time, I lived it,” Omotoso said. “I think it’s why I fight the way I do. I had to fight to get off the streets of Lagos and it’s why I fight as a professional, because I know what death is and what it’s like when you’re forced to steal, because if you don’t, you starve.”

With that in mind, it’s unlikely that former champion Brian Carlos Castano can instill fear into Omotoso, when they meet in a 10-round super welterweight showdown that headlines FS1 PBC Fight Night/FOX Deportes (10:30 p.m. ET/7:30 p.m. PT) this Saturday, November 2, from the MGM National Harbor in Maryland.

Omotoso (28-4, 22 KOs) is the second of five children. He was seven years old  when he lost his mother, Maria. Three days after she gave birth to his younger brother, she went to Wale’s father, Sunday, complaining about stomach pain. Sunday took her to a hospital and a few hours later returned to tell his children, “You won’t see mommy again.”

After Maria died, discipline was lost. Wale’s father was a migrant worker, roving nearby countries to work and live in cramped and filthy labor camps. He would be gone for three, sometimes four days at a time.

Sunday would routinely leave at 4 a.m., leaving the children some money that was expected to last until he returned. It seldom did. The children would fill their bellies with chicken, but they would rarely walk the four miles to school every day.

“If we didn’t go to school, no one would know, and no one knew we didn’t do our homework,” said Omotoso, 34. “I would sign things and say my dad signed it. In African schools, no one says anything to your parents.

“That’s how I found out I could fight. They called us the ‘Street Boys.’ We did anything we wanted to do. There were a lot of gangs, but we called them ‘Street Boys,’ not gangs. We fought and shot each other all of the time. I saw kids my age, eight, nine-year-old kids killed all of the time.

“ I saw kids my age, eight, nine-year-old kids killed all of the time. ”

“That was the street life. If you reached nine, you were a man. I started fighting in the streets when I was five, six. When I was nine, I punched someone so hard, I knocked them out. If I didn’t punch you and you didn’t go down, I would go right for a weapon. I wanted to learn to beat people up with no machete, no gun, no knife.”

He got his chance.

When someone put his hands on Omotoso’s sister, Wale did something about it. They went at it for about four minutes, Wale recalled, and the kid never went down.

Wale was told the kid he fought was a boxer. “What is boxing?” Omotoso asked. His family knew wrestling—professional wrestling, like poking people in the eye and head butts. Boxing was completely foreign to him.

Omotoso wanted to find out. He sought out a local gym. He was roughly 16 at the time. He had a reputation on the Lagos streets. That followed him when one of the trainers told him he could crack.

“That day saved my life, because if I didn’t find boxing, I would be dead, I’m telling you,” Wale said. “Most of the kids I grew up with, they’re all dead. Almost every one of them. There were around 40 of us in the streets. Today, I would say, there is less than 10 of us alive today.

Back in March, Castano fought to a 12-round draw against the reputable Erislandy Lara in defense of the WBA super welterweight title.

“This is the most important fight on my career,” Wale said. “When I beat this kid, the sky is the limit. I’ve never beat an undefeated fighter before. I know there is a first for everything. This is my third fight (in 2019), and when you regularly fight, you get better.

“I understand the ring more. I won’t waste time. I have confidence. I will beat him. He has nowhere to hide. You will see a different ‘Lucky Boy’ against Castano. This fight means everything to me. The way I always see it, if I can survive being stabbed in the hand, and the head and the back, and shot at, I can survive anything.

“They don’t call me ‘Lucky Boy’ for nothing.”