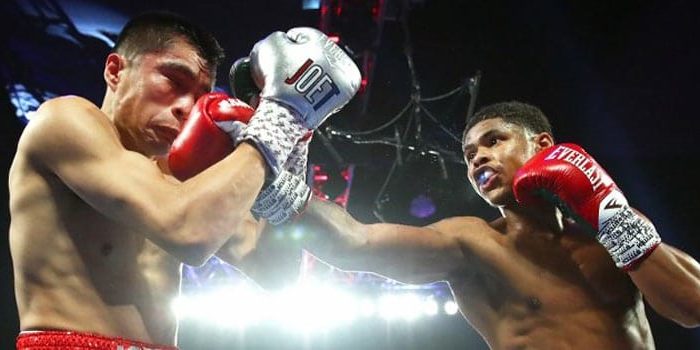 Shakur Stevenson is a world champion. The former Olympic medalist displayed all his boxing skills and completely neutralized Joet Gonzalez (his girlfriend’s brother) to conquer the vacant World Boxing Organization (WBO) featherweight title in front of 2,828 fans at the Reno-Sparks Convention Center.

“This is a great feeling. One of the best feelings of my life,” said Stevenson. “I have a lot of respect for Joet. He is a great fighter. I have nothing against him. If he decides to be cool with me, I’ll be cool with him.”

Stevenson already knows what he wants the next challenge in his career to be.

“Josh Warrington! You are a champion, now I am a champion. Let’s do this! I want to unify titles.”

Mikaela Mayer, the former Olympian and now one of the biggest attractions in women’s boxing, defeated Alejandra Zamora by technical knockout in the sixth round to retain her NABF super featherweight title.

Mayer was the aggressor from the opening bell and connected strong blows looking to finish the fight early, but surprisingly Zamora took everything Mayer threw at her. It was not until the end of the fifth round that Zamora’s corner did not allow the Argentinian to continue fighting.

Greer, who improved to 22-1-1, 12 KOs, raised the intensity level from the sixth round on and took control of the fight. Nieves dropped Greer in the final round, but Greer recovered without problems and managed to finish the fight.

“I am a champion. I know how to win,” said Greer. “At the end of the day, I go home a winner, and he will go home a loser. I am ready for a world title opportunity. It doesn’t matter who they put in front of me, I will get the job done and I will be victorious.”

“I felt great in my pro debut! I took control of the fight and dominated my opponent with my jab right from the very first bell. I got him with a solid body shot and he went down for the count, but if he had gotten back up, I was going to take him out of there quickly anyway.”

— Promising 17-year-old Puerto Rican prospect, Xander Zayas (1-0, 1 KO), dropped Genesis Wynn a couple of times on his way to a first-round knockout victory, in his pro debut. Zayas knocked down Wynn with a quick straight right hand and immediately repeated the dose, forcing the referee to stop the fight at 1:24 of the first episode.

“I felt super great. Even though it was my pro debut, I was very relaxed and focused because I knew we had done the hard work in the gym. I just followed the game plan my team established. I have a great team around me. This is just the beginning.”

— Former world title challenger Jason Sanchez (15-1, 8 KOs) returned to the winning route by securing a fourth-round knockout against Brazil’s Adeilson Dos Santos in an eight-round featherweight match. The end of the bout came at 2:59 after Sanchez sent Dos Santos to the canvas for the count.