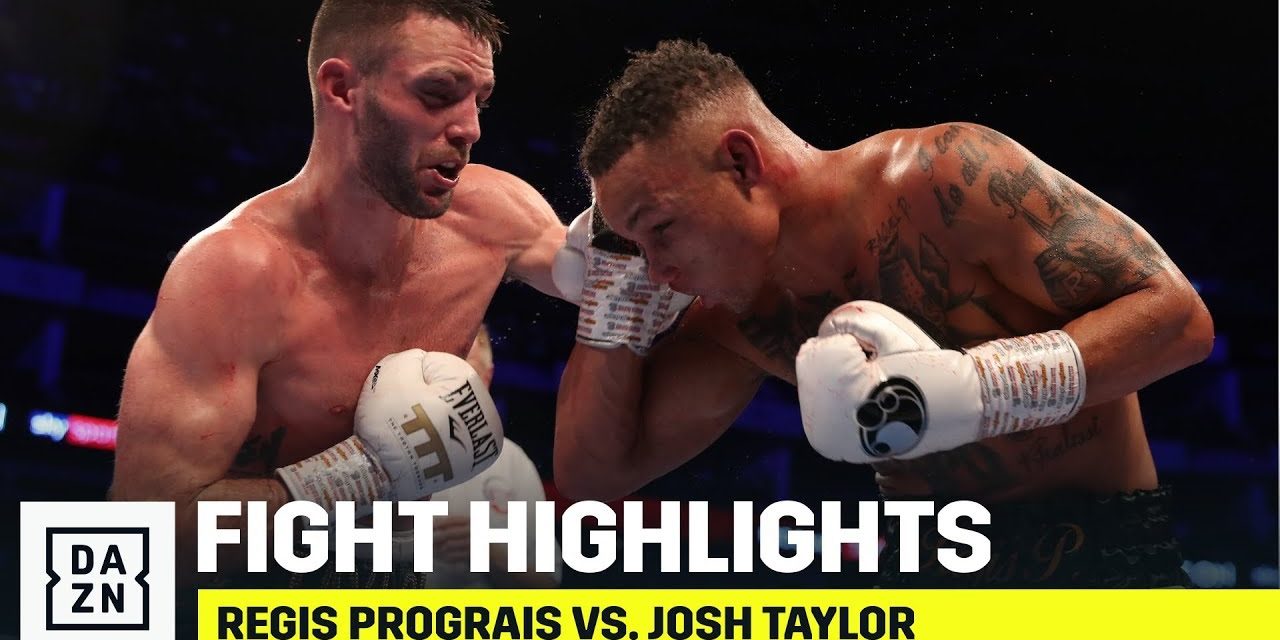 Regis Prograis and Josh Taylor couldn’t stop jawing at each other during the build up of their unification bout as to who the best boxer was in the super lightweight division.

On Saturday at the O2 Arena in London, Taylor (16-0, 12 KOs) showed his bite was bigger than his bark when he beat Prograis (24-1, 20 KOs) via majority decision in an evenly matched, highly skilled encounter that delivered on its promise with a tit-for-tat fight.

Taylor, who walked into the ring as the IBF champion, walked out of it with the WBA crown and in the process picked up the Ali Trophy for winning the World Boxing Super Series, and, separately, the vacant 140-pound Ring Magazine title.

It was a gutsy performance from both parties showing high-class boxing and a great win for the Scottish fighter, who displayed exceptional grit throughout. The southpaw came out of his corner slugging throughout the entertaining scrap, precisely using his two-inch height and 2½-inch reach advantage, as well as two years in youth against Prograis, and outpowered the Bayou-based American boxer.

“I believe you saw the best of Josh Taylor tonight. That was a walk in the park tonight, wasn’t it. Easy fight, wasn’t it?” Taylor laughed immediately after. “What a fight. All respect to Regis Prograis on a great fight, but the best man won, and I knew I was going to win.”

The fight got off to a competitive start as the first two rounds were toss ups. By the third, Prograis’ body attack reddened the right ribs of Taylor. In the fourth round, Taylor stuck a continuous jab to the face of Prograis, who momentarily had his mouthpiece slip out.

In the fifth, Taylor connected with a counter right hook that landed flush, but Prograis shook his head in disapproval. Taylor showed more power in the sixth with a thudding left hook and turned the momentum back into his favor.

Taylor got in a groove and continued the punishment in the seventh, landing flush on Prograis, who immediately started moving his head more to dodge Taylor’s barrage.The physicality was starting to show on the blood-spattered face of Prograis, who landed a beautiful left counter in the eighth round that was his most impactful punch since the fourth.

“He was very strong with head movement. I knew I could get to him,” Taylor. “He certainly lived up to his name, and his power definitely exceeds his reputation.”

Taylor rebounded in the ninth and continued to connect in the inside as Prograis appeared to fade. By the tenth round, Prograis appeared dazed and backpedaled toward the end of the round to save himself from further punishment.

In the eleventh, Taylor’s swollen eye was cut as a desperate Prograis stole the round with a rally filled with counters.

Both fighters knew the fight was close and stepped to the middle of the ring and engaged at the same frenetic pace as they did for the eleven rounds before beginning the twelfth. The torrid pace was too even to determine who won the final frame, but Taylor ended up officially edging it.

“It was a close fight, but the better man won tonight, so it’s cool,” said Prograis. “I thought I caught up, I started timing him and moving my head but he won. I won’t make any excuses. I definitely enjoyed it. Hopefully we make part two.”

Taylor became the ninth active boxer in the sport to unify a division by holding a title from one of the four major sanctioning bodies. He joins Andy Ruiz, Artur Beterbiev, Julian Williams, Errol Spence Jr., Jose Ramirez, Vasiliy Lomachenko, Daniel Roman and Naoya Inoue as the only unified champions of the sport.

To win the WBSS tournament, Taylor beat Ryan Martin and then Ivan Baranchyk.

The 28-year-old Taylor now has his sights set on Ramirez, the WBC and WBO super-lightweight champion, in yet another unification fight in 2020 to crown the undisputed champion in the 140-pound weight class.