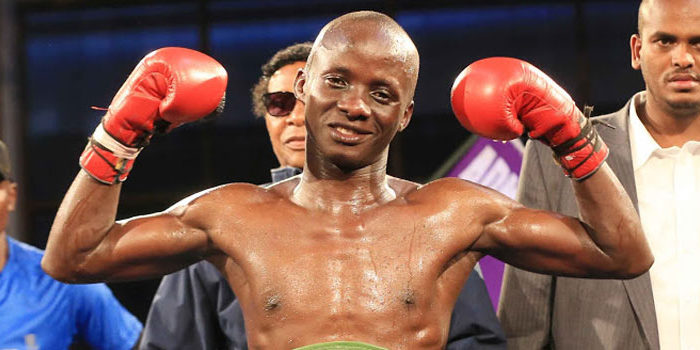 “I now want to be the best in Africa. Winning at the continental level will definitely open up the mighty doors to bigger titles like the WBC and IBF,” he said.

Wesonga stretched his fight record to 7 wins, one draw (7 TKOs) when he beat the Tanzanian in the third round TKO to clinch the East and Central Africa super featherweight title. Saturday’s fight went down as Wesonga’s seventh TKO win.

On the same night, Kenya’s Emmanuel Chivoli was declared the winner against Tanzania’s Francis Miyeyusho who lost the lightweight non-title bout via third-round TKO at Charter Hall, Nairobi.

The Tanzanian complained he was head-butted by Chivoli, forcing the referee to stop the fight after a deep cut below Miyeyusho’s right eye. But Miyeyusho was dismissed by compatriot Emmanuel Mlundwa.

Mlundwa, a former star Tanzanian international boxer and the brains behind the introduction of pro-boxing in East Africa’s largest country, told his countryman Miyeyusho to accept defeat and move on.

Miyeyusho claimed he couldn’t continue because of a cut caused by a head butt. “That cut was not serious, Miyeyusho was just tired,” said Mlundwa.

“He boxed well in the first and second rounds but was overcome by Chivoli in the third round. I personally had a closer look at the cut; it was not that serious especially in pro boxing.”

“On behalf of KPBC, I would like to appreciate each and everyone for their support and love towards the Redemption Night Fight. Going forward, we will witness a more vibrant commission. We urge all boxers to step up training as there is a lot more in store in terms of regular fights.”