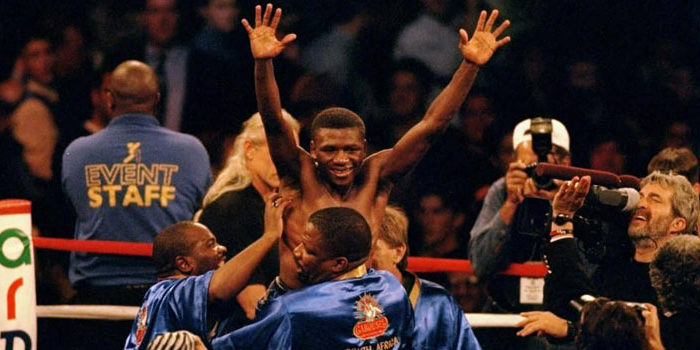 Former world junior featherweight champion Vuyani Bungu is among the nominations for the International Boxing Hall of Fame in Canastota, New York.

The Hall of Fame released the ballots to the worldwide voting panel for the 2020 elections this week.

The Boxing Writers Association of America’s members and an international panel of boxing historians will also cast their votes.

Vuyani Bungu belongs in the Hall of Fame

Bungu is a Hall of Fame quality fighter who enjoyed a glittering career in South Africa and internationally. Bungu won more King Korn/Boxing World awards than any other pugilist and was voted SA Boxer of the Year five times in the 1990s.

Only two South Africans, Stan Christodoulou and Brian Mitchell, have graced the Boxing Hall of Fame but there is little doubt that Bungu deserves to be the third.

Bungu made 13 defences of the IBF junior-featherweight belt which eclipses the 12 defences made by Mitchell. In 44 professional fights, Bungu earned 39 wins including 19 Knockouts. The fighter from Mdantsane in the Eastern Cape was nicknamed the Beast and later the Carousel Kid. He began his career in his hometown back in April of 1987, stopping Xolela Makhuluma in the fourth round.

The Beast won his first thirteen professional bouts in a row and was rewarded with a shot at Fransie Badenhorst’s South African Super Bantam Title in a fight at the Good Hope Centre. Bungu lost the fight on points but claimed the title in a 1990 rematch in East London.

His first fight outside of South Africa came against Cirilo Ramon Figueredo at the Palazzetto dello Sport in Selvino, a one-sided bout he won with a ninth round stoppage.

The Beast becomes the Carousel Kid

In 1994 Bungu earned his Carousel Kid nickname when he took the International Boxing Federation World Super Bantam Title off of McKinney at the Carousel Casino in Hammanskraal. Bungu handed McKinney the first loss of his professional career. He beat the American again in their 1997 match which was named fight of the year.

Voters from England, Japan, Canada, Australia, New Zealand, Germany, Mexico, Puerto Rico, and the United States are among those who will participate in the election process.

The results of the voting will be announced in early December and the 2020 Hall of Fame Induction Weekend will be held from June 11-14 in Canastota, New York.