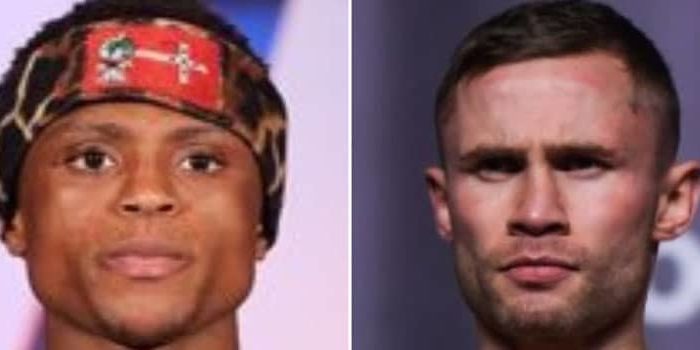 Former two-weight world champion Carl ‘The Jackal’ Frampton 26-2 (15 KOs) has hit back at claims from Isaac Dogboe 20-2 (14 KOs) that he bullied him around the ring during a sparring session when he was a rank novice.

The former WBO super bantamweight champion, who has been discussed as a future opponent for Frampton, insists he will knock him out before targeting UFC star Conor McGregor.

“I’m telling you this from the bottom of my heart. I was sparring Frampton when I was 1-0 and Frampton, he was a world champion, he was at the top of his game and I pushed him back, I pushed him around the ring,” Dogboe said.

“I am not going to go into details I am just going to leave it at that.

“When this fight comes on and everyone knows I said it first, I am going to knock him out and then I am going to call for that Irishman Conor McGregor.”

Frampton has a different recollection of the sparring, labelling Dogboe’s story “nonsense”.

“Former world champion Isaac Dogboe talked a good game, but in the end he decided not to fight me on November 30 in Las Vegas,” Frampton wrote in his column for Sunday Life.

“I have to say I am very disappointed in Dogboe because he had been talking nonsense about how he was going to knock me out and making suggestions he had got the better of our sparring.

“I remember sparring as well – 14 ounce gloves, bigger than the ones we use in a fight, putting him flat on his back with a left hook, so I think he should keep his disillusion thoughts to himself.

“I don’t normally talk about sparring, but Dogboe, disappointingly has shown me a lack of respect, as I was the one who helped him out earlier in his career by bringing him into camp.”

Frampton will lace up the gloves for the first time since his loss to IBF featherweight champion Josh Warrington when he takes on American Tyler McCleary 16-0-1 (7) in Las Vegas on November 30.