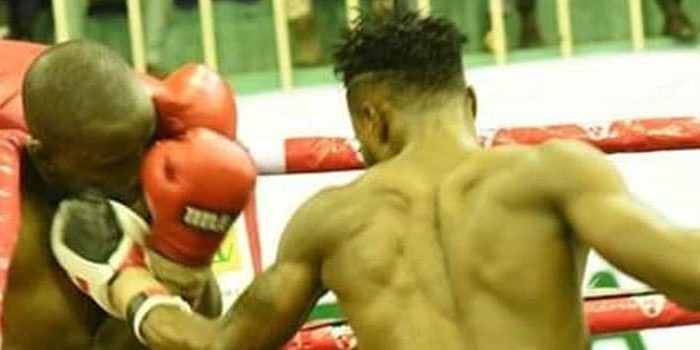 Oladosu released a barrage of punches, turning his opponent into a punching bag. “Take Blow” took enough blows without any response, forcing the referee to stop the bout.

“I just wanted to use this fight to show ‘Joeboy’ what am capable of,” Oladosu said during his post-fight interview. “I saw him watching and he should be wary.”

Joseph, who is still nursing the arm injury he sustained that led to the postponement of his October 12 bout versus Oladosu, sat ringside to watch his rival.

In the co-main event, National and West Africa Welterweight Champion Rilwan “Babyface” Babatunde (10-0, 6 KOs) scored a fourth-round TKO over Saheed Lawal (0-3), who was a late replacement for an injured Dennis “The Range” Mbat.

The ending came when Babatunde rocked Lawal with a solid right-left combination. He then pinned Lawal to a corner and followed up with a flurry of punches, leaving the referee no choice but to jump in and halt the contest. Official time was 0:47.

Here are the rest of the results:

Ogunsemilore was taken to the distance for the first time in her pro career. However, she did enough to earn the unanimous decision win in the super

Towolawi and Olajide first met back in 2016, with Towolawi winning a unanimous decision then.