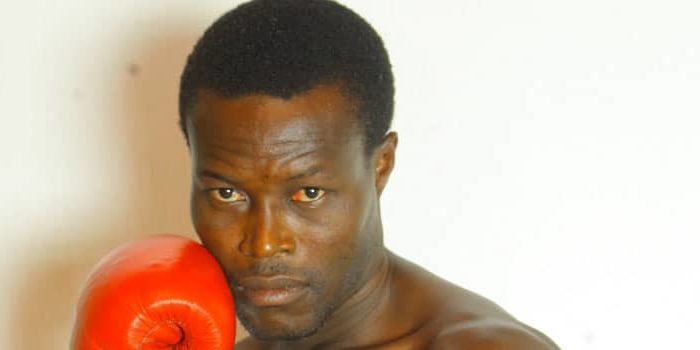 The bout headlined a card dubbed “Edo Boy Homecoming.” It was put together by Prince Omo-Eghareva, VP of the Nigeria Boxing Board of Control (NBB of C) to honor Eribo, who was fighting for the first time before his home fans since winning the ABU light welterweight title by beating Isaac Sowah of Ghana in 2016 in Lagos.

After the fight, the Africa Champion told BoxingAfrica.com that he is disappointed he has been unable to secure fights regularly.

“This fight was packaged by my people who were eager to see me fight and I’m grateful, but totally disappointed that I have not been that busy,” he lamented.

“I don’t want to get rusty and that’s why I want promoters to give me fights.”

Eribo started his professional career in Ghana when he debuted with a TKO win against Daniel Mensah in 2012. He then went on to amass ten wins while in Ghana before making his way back to Nigeria.

“I may be returning to Ghana for a short period due to lack of fights here for me as I believe they have more promotions there and will give me better opportunities as I don’t want to be stripped,” he stated.

Since winning the Africa light welterweight title on GOtv Boxing Night 13 on December 26, 2016, Eribo had only defended it once, a unanimous decision win against Ramadhani Shauri of Tanzania on October 1, 2017.

In the other bouts on the homecoming card, Aaron Ehidiamen earned a unanimous decision victory over debutant Stevenson Ugbogbo in a four-round cruiserweight contest.

The card was also used to inaugurate the NBB of C South-South Nigeria Area Council headed by Prince Sonny Omo-Egharevba.