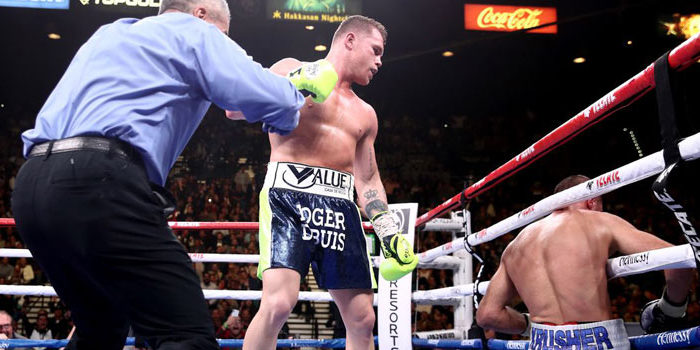 LAS VEGAS — Canelo Alvarez, constantly driven to make boxing history, secured another piece of it on Saturday night, but it was not easy.

Alvarez, who was having a hard time dealing with Sergey Kovalev’s size and jab, scored a massive 11th-round knockout to win take his light heavyweight world title before a pro-Canelo crowd of 12,646 at the MGM Grand Garden Arena on Saturday night to add significantly to an already stellar resume.

Alvarez, the reigning middleweight world champion and boxing’s biggest star, moved up 15 pounds and two weight divisions and won a world title in a fourth division to join some of boxing’s all-time greats.

Whatever problems Alvarez seemed to be having, he was ahead 96-94 on two scorecards, while it was 95-95 on the third. ESPN had Kovalev ahead 97-94 at the time of the knockout.

However the fight was being scored, Alvarez got the job done impressively to become only the third former junior middleweight titleholder to also win a belt at light heavyweight, a spread of 21 pounds (154 to 175). The others are enshrined in the International Boxing Hall of Fame, where Alvarez surely will join them someday: Sugar Ray Leonard, Thomas Hearns and Mike McCallum.

“I’m very thankful,” Alvarez said through an interpreter. “This is just a step in my career, in my history, and all I ask of you is to be patient because Canelo will make history. That’s a guarantee.”

Alvarez, who would like to eventually usurp Julio Cesar Chavez as Mexico’s all-time best fighter, became the fourth Mexican to win world titles in four divisions, joining Hall of Famer Erik Morales as well as Juan Manuel Marquez and Jorge Arce, who are both on this year’s ballot for the first time. Alvarez (53-1-2, 36 KOs), 29, of Mexico, has also won titles at junior middleweight, middleweight and super middleweight.

In addition, Alvarez, who was a career-high 174.5 pounds, became only the second Mexican to win a light heavyweight title; the late Julio Gonzalez briefly held a 175-pound belt in late 2003 and early 2004.

The fight was held up by broadcaster DAZN for more than an hour to await the conclusion of UFC 244 in New York, hoping to attract subscribers who also wanted to watch Canelo-Kovalev live. But by waiting, the fighters, were shown nearly asleep in their dressing rooms before the fight, which did not begin until 1:18 a.m. ET.

Inside the arena, the UFC main event was shown on the big screens. MGM Grand officials sought permission from UFC broadcaster ESPN, which gave the OK.

When the fight finally began, Alvarez and Kovalev fought at a measured pace with Alvarez looking for a way inside against the taller man and Kovalev (34-4-1, 29 KOs), 36, a Russia native fighting out of Los Angeles, steadily employing his jab and mixing in a few hooks.

Alvarez said he would make a body attack a major part of his game plan because of Kovalev’s perceived weakness to those shots, and he got going with it in the second round. He landed several to the midsection with both hands to force Kovalev to step back.

Kovalev’s jab, as expected, was his best weapon. He doubled and tripled up on it, but he also mixed in body shots and hooks as Alvarez continued to have a hard time getting inside on him.

Alvarez, who earned $35 million, forced Kovalev back early in the sixth round with a solid hook, followed with a shot to the belly and then seemed to stun him with a left hook to the head.

The crowd began to chant “Canelo! Canelo!” in the seventh round as he stalked forward and fired hooks and body shots as Kovalev tied him up.

Kovalev, who made $3 million plus millions more from the $12 million package Golden Boy paid to his promoter, Main Events, continued to have success with his jab in the ninth round. He shoved one down the middle and followed with a right hand that connected midway through the round. Kovalev had a big 10th round thanks to — what else — his jab. He fired them one after another while Alvarez barely got anything off.

But in the 11th round, Alvarez ended the fight with two massive punches. He landed a left hook on the chin that badly hurt Kovalev and had him nearly out on his feet before following with a hellacious right hand on the chin. The shot sent Kovalev collapsing to the mat onto his knees with his body turned toward the ring ropes and partially hanging over them. Kovalev appeared out cold and referee Russell Mora immediately waved off the fight without a count at 2 minutes, 15 seconds.

“The plan overall was patience, that was basically it — to have patience,” Alvarez said. “We knew it was going to be five, six rounds and it was going to take some time for me to get him. But honestly he’s a great fighter. I’m new at this weight, new in this division. Much credit to him. He’s a great fighter, but we stuck to our game plan. It was delayed a little bit but overall it was successful.

“It was a very close fight because he was defensive, he was closing up his guard. All he was doing was try to establish points, but we knew what was coming. Inevitably it would come, and everything came out the way we had planned.”

According to CompuBox statistics, Alvarez landed 133 of 345 punches (39 percent) and Kovalev landed 115 of 745 (15 percent). But Alvarez closed the show by landing a fight-high nine power shots in the 11th round. Kovalev threw a career-high 577 jabs but landed only 63.

Now the question will be in which division will Alvarez fight next? He owns belts at light heavyweight and middleweight and a secondary title at super middleweight.

DAZN, which has Alvarez and Gennadiy Golovkin under exclusive nine-figure contracts, has desperately wanted a third fight between the two following a disputed draw in 2017 most thought GGG won and a majority decision win for Alvarez in the 2018 rematch. Alvarez, however, has not been interested. He wanted the history Kovalev could provide, but now he might change his tune.