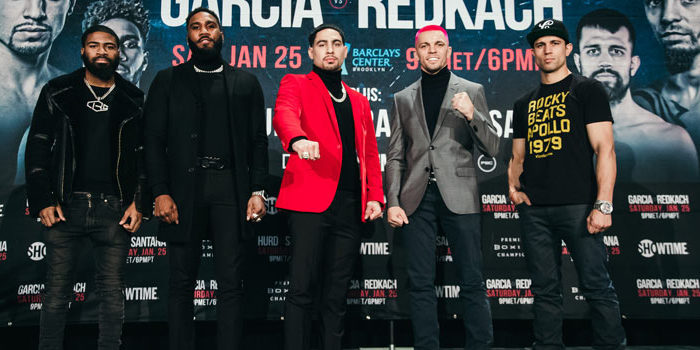 Here is what the press conference participants had to say Wednesday from Barclays Center:

“This is my eighth fight at Barclays Center and I’m excited to be back. I’ve fought in a quarter of the events here at Barclays Center, so you could say this is my house. I’ve had some historic fights in here. I love walking in the tunnels and seeing my pictures next to Jay-Z, DMX and Rihanna.

“Come January 25, this is going to be another great night of boxing. I know Ivan is coming to fight. We’ve followed each other’s careers. I know he’s hungry and he wants to show the fans that he belongs on this level.

“I’m excited to share the card with my Philadelphia brother Stephen Fulton, who I’ve known since he was a kid. Plus, Jarrett Hurd, who’s journey I’ve been watching. It’s been great and he’s going to show everyone that a loss doesn’t mean anything. Just like I have.

“I just think the culture here in Brooklyn is great and I fit right in with it. Lots of hip-hop and Puerto Ricans. It’s the perfect market and we just go together.

“If the top welterweights want to fight me, I’ll be ready whenever. Redkach makes a lot of sense because he’s a southpaw and that would have me ready for Errol Spence Jr. or Manny Pacquiao.

“We picked Redkach because he’s dangerous and we knew he’d be tough. I’m definitely not overlooking him. I’m training hard for this fight. For me, this is a big fight. If I overlook him, it could ruin everything. I want to show everyone I’m still one of the best pound for pound fighters in the world.

“Redkach has a big heart and he’s going to come forward. I think it’s going to be a really entertaining fight. I can’t overlook him.

“I always feel like I’m the best. They need me, I don’t need them. I’m one of the best fighters in the world and I’m going to be here for a while.”

“I want to give thanks to my team and everyone involved in making this fight and for believing in me, which give me the belief that gives me the strength to go in the ring and give it my all.

“This opportunity fighting at Barclays Center is huge for me. I accept the opportunity with honor and I want to thank Danny Garcia for taking the fight.

“My friends and family provide me with the will to win. That support, along with my experience, is what I’ll need to win this fight.

“The victory over Devon Alexander was important because he was a well-known opponent. Winning in the fashion that I did catapulted me to where I am right now.

“Danny made a mistake if he thinks this is a tune-up. I’m going to give everyone a great fight and we’ll see what happens on January 25.

“I’m training very hard because this fight is extremely important to me. I have to give the best performance of my professional career.

“The energy in the building on January 25 is going to give me the extra motivation to not only put up a great performance, but to leave Brooklyn with the victory.”

“This is my first time doing interviews since I fought Julian Williams. Last time I was up here I was an undefeated fighter and then I suffered my first loss.

“We had the rematch set up for this December, but with me going through a switch in trainers and still in the process of searching, I wasn’t in condition for it. It was the hardest thing possible to not take the rematch, much harder than taking it.

“I’ve been training in Colorado with Kay Koroma and getting away from everything. We’re focused strictly on boxing. I cut the hair off too because I was just ready for a change. The work so far is showing me how much work I have left to do and how much room I have to grow.

“I will stay at 154-pounds and fight for my titles again. I’m not looking past Francisco Santana because he’s a great fighter. I’m working hard to get back to the old me.

“This is the fighter who was put in front of me. He has the style that we were looking for with my having my first fight with my new trainer. I had some time out of a gym after the Williams fight but now we’re going strong toward January 25.

“I would never say I overlooked Julian Williams. There’s no excuses. Julian was the better man that night. When I look back there were probably some things that could have affected me, but Julian deserved to win the fight.

“I’m not thinking about anyone but Francisco Santana. I look back at my fights and realize that I won those fights on pure heart and determination. We’re doing things different this time and working behind strategy and skills.”

“Jarrett Hurd is a good solid fighter who’s accomplished a lot. This is my Super Bowl. When someone calls and presents an opportunity like this, you can’t turn it down.

“To fight against one of the biggest names in the division, that’s hard to say no to. Of course I’m going to step up to the plate and on January 25 I’m going to show everyone the definition of never giving up on a dream.

“I’ve had setbacks like Jarrett and I’ve picked myself up and rose to the occasion time and time again. On January 25 I’m going to fight with every ounce of spirit that I have in me so I can go on and become a world champion.

“Jarrett has himself with a new team and when a fighter feels refreshed, you know he’s going to come out strong. I expect nothing less.

“I know that everyone is giving me zero chance come fight night. But that’s okay. I read the comments and what people say. It’s all good. My team believes in me and I believe in myself.

“I’m a big welterweight and people tend to forget that I started my career as a super welterweight, but back then I was self-trained. I used to fight on a couple weeks’ notice and was bouncing from gym to gym. When I met coach Joseph Janik, it all changed and we’ve been together about a decade now. He was the missing piece to my puzzle.

“I’ve often said it’s not how you start a race but how you finish it. I know it’s not an easy task, but I look forward to these big challenges. It will test me as a fighter and a human being. I want to show the whole world my definition of never giving up.

“The minute I stop learning, that would be the time I need to hang them up. I’m still learning and we’re still getting better at our craft. It’s a big challenge. He’s the monster of the division, but this is a great opportunity for me. Sometimes you have to face the monster head on.”

“I’m from Philadelphia and Khegai used to live there, but I truly live in Philadelphia. It runs through my blood. That’s how I’m going to carry on and go about this fight.

“This is not the first undefeated fighter I’ve fought. It will be the seventh that I’ve fought and beat. Six have already fell and I don’t know why these guys keep taking these fights. You’ll see what I’m talking about on January 25

“This means a lot to me, but I’m not a rookie. I don’t look at this like something that will bring my nerves up. This is normal to me. I always get things the hard way.

“People like me have been working hard our whole lives. This opponent is no different than anyone I see walking the streets of Philadelphia. I’m always ready.

“Fans should expect a wonderful and intelligent boxing game plan. Khegai is coming to rumble. He thinks he’s stronger than me, but he’s not stronger or smarter than me. No one in my weight class will out think me.”

“Arnold is taking this fight very seriously and he’s going to be arriving in training camp today with Joe Goossen.

“Arnold made his us debut in Philadelphia and I know there will be a lot of fans from Philadelphia here. There’s also a great community in Brooklyn with people from the Ukraine and Russia who will be supporting him on fight night.

“We’re excited for this opportunity and we’re looking forward to making this a great night on January 25.”

“Next week, we will begin a run of eight live boxing events in 10 weeks on SHOWTIME featuring many of the biggest stars in the sport. In Atlanta, on Saturday, December 28, Gervonta Davis, Yuriorkis Gamboa, Badou Jack and Jean Pascal will compete in two world title fights. On January 10, Claressa Shields, the No. 1 star in women’s boxing, faces Christina Habazin for a unified 154-pound world title. Rising star, Jaron “Boots” Ennis will also be on that card. And, of course, on January 25, we are excited to present two of the biggest stars in the sport, Danny Garcia and Jarrett Hurd, both former unified world champions, both fighting in important, must-win fights to begin a new chapter in their careers.

“SHOWTIME is proud to continue our tradition of televising important, competitive and meaningful world championship boxing in 2020, our 34th year in the business, with these excellent fights and this great series of events.”