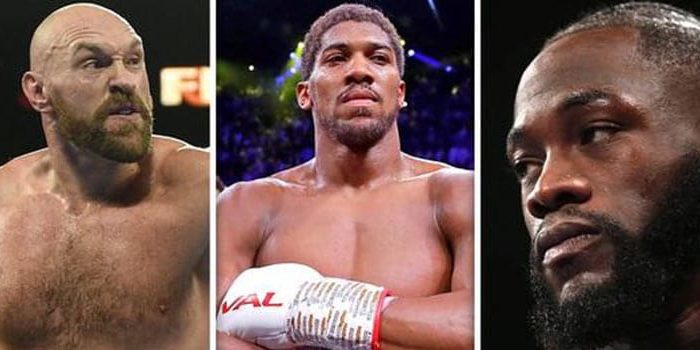 Tyson Fury has accepted an offer to spar with Anthony Joshua in an effort to help Fury win his rematch with Deontay Wilder.

Joshua dominated Andy Ruiz Jr. in a rematch earlier this month to reclaim three heavyweight title belts and had offered to spar with Fury to help his British compatriot in his upcoming bout with Wilder, reasoning that he is the more likely of the two to accept a unification fight.

Lineal heavyweight champion Fury faces Wilder, who holds the WBC world heavyweight title, in a rematch on Feb. 22. Fury got up from a hard 12th-round knockdown to draw on points when the pair first fought in December 2018.

“I’ve just seen the video of Joshua saying he’d love to come and help me in camp and that I’d fight him quicker than Wilder, that’s for sure,” Fury said via an Instagram post Tuesday. “When I beat Wilder I will fight you A.J., no problem.

Joshua (23-1, 21 KOs), 30, had offered his support to help fight Fury in his upcoming rematch earlier Tuesday, as well as predicting that Fury will become a world heavyweight champion for a second time.

“I think Tyson Fury would fight me quicker than Wilder would. If that’s the case, I want Fury to win, because I just want to fight,” Joshua told Sky Sports. “To have that fight here on British soil? Man, can you imagine that?

“Fury, if you need me for sparring, we’re going to fight one day. I’ve sparred Tyson Fury when we were kids anyway. I would go out to America and spar Tyson Fury and get him ready for this Wilder fight.

“Honestly, I think [Fury] might beat Wilder next time they’re out. That’s just my opinion.”

Joshua has previously said that he is ready to face Wilder in a unification fight but has been unable to agree terms to a bout.

Fury (29-0-1, 20 KOs), 31, split with his trainer, Ben Davison, on Sunday, with the British boxer later confirming that he would be trained instead by Javan “Sugar” Hill.

Top Rank chairman Bob Arum, Fury’s co-promoter with Frank Warren, said last month that Fury’s rematch with Wilder (42-0-1, 41 KOs), 34, will be a joint pay-per-view between ESPN, with whom Top Rank has an exclusive deal, and Fox, which has a deal with Premier Boxing Champions, where Wilder fights.