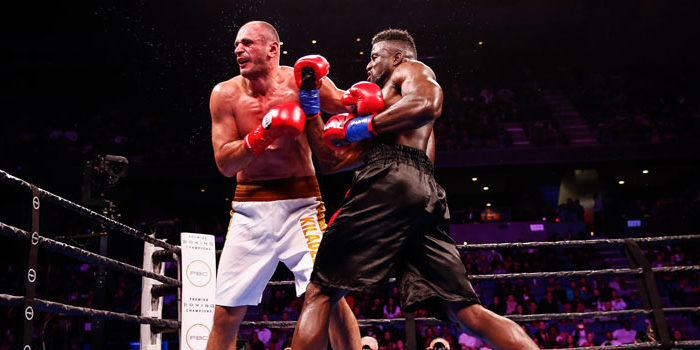 The last thing rising heavyweight Efe Ajagba expected against Iago Kiladze was to be looking up at him from the canvas in the third round. But that’s where he was, somewhat disconnected from his senses, before he regrouped.

Ajagba attacked from the opening bell. In the second, a right to the temple sent Kiladze (26-5-1, 18 KOs) down supine on the canvas. It looked like he was through. But referee Thomas Taylor allowed Kiladze to continue on spaghetti legs—and wisely so.

With a minute left in the third, Kladze seemingly still out on his feet, nailed Ajagba with a right to the jaw. Ajagba hit the mat hard, rising at the count of eight.

Finally, his legs underneath him, Ajagba put an end to the intrigue with a textbook right to the Kiladze’s cheek in the fifth. Kiladze somehow managed to rise to his feet but when Ajagba followed up, his corner wisely threw in the towel.

“When I got knocked down, I didn’t see the punch coming. I tried to hit him with the left hook and that’s when I got caught,’’ Ajagba said. “He has a lot of experience and he’s a good fighter. This kind of fight will help me perform better in the future. This guy was a good fighter and he can take a lot of shots. I missed a lot of shots.

“Ronnie Shields, my trainer, kept telling me to work behind the jab and come back with the hook. It’s something that I have to learn to do. I made some mistakes, but I will go back to the gym and work on it. I’ll do better next time.”