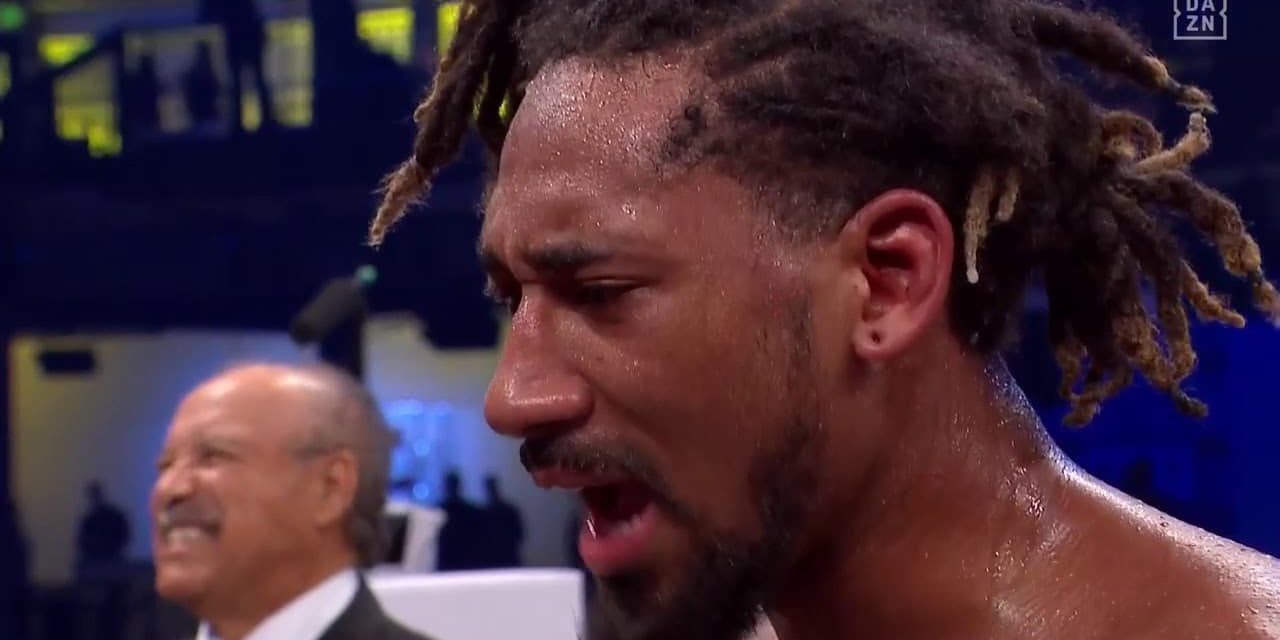 With the fight threatening yet again to go the way of his last several, Demetrius Andrade found a way to close the show.

Whether or not it finally leads to the superfight he’s long craved remains to be seen, although it certainly can’t hurt his chances any.

Providence’s Andrade successfully defended his middleweight title for the third time, taking out Ireland’s Luke Keeler in the 9th round of their main event Thursday evening live at Meridian at Island Gardens in Miami, Florida.

Andarde scored two early knockdowns, but it was a late flurry which prompted referee Telis Assemenios to mercifully halt the contest at 2:59 of round nine.

For all of his talk of craving a middleweight superfight, the onus was on Andrade to make a statement with his performance. He sought to do just that, charging forward right out the gate and sending Keeler crashing to the canvas. The moment created false hope for an early ending, in fact eerily similar his 12-round wipeout of Poland’s Maciej Sulecki in his prior performance last June.

Keeler found himself back on the deck twice in round two. The first was yet the latest in an odd series of shoulder bumps by Andrade, an infraction for which he was gigged in the opening round. The unbeaten southpaw found his range in the final minute, crashing home a straight left which put Keeler flat on his back. The visiting Irishman beat the count and finished the round on his feet, which is where he remained throughout all of the third frame—and for the balance of the fight, which given its start was the only upset to come of the main event.

Andrade remained at close quarters for much of the bout, though his interest in closing the show decreasing with each passing round. Keeler did his best to turn things around, but his will alone wasn’t nearly enough to overcome the disparity in skill level between the two. Still, the first time challenger managed to sneak in enough right hands and also throw enough punches to get a rise out of the Irish supporters in attendance.

The crowd came alive in round nine, as Andrade had Keeler pinned along the ropes and threatening to end the night. Just when it appeared that Keeler would get out of harm’s way, Andrade found a way to bring closure to the post-midnight main event.

A left hand had Keeler out on his feet just as the 10-second clapper sounded. The visiting contender staggered into the ropes, getting caught with two more power shots before he was rescued by the third man.

As for Andrade, the wins continue to pile up. The defending middleweight titlist advances to 29-0 (18 KOs), picking up the second stoppage win of his title reign and his earliest night at the office in more than four years. Not since a 2nd round stoppage way back in October 2017 has Andrade seen a bout end before the 12th round. A last round stoppage of Artur Akavov marked his only middleweight bout to not go to the scorecards, having racked up lopsided decision wins over Walter Kautondokwa to win the crown and versus Sulecki in his last performance.

Joseph ‘Jo Jo’ Diaz got it right the second time around.

The 2012 U.S. Olympian backed up his pre-fight promise of ending Tevin Farmer’s title reign, claiming a well-earned unanimous decision in their 12-round junior lightweight title heat Thursday evening at Meridian at Island Gardens in Miami, Florida.

Scores of 116-112 and 115-113 twice for Diaz, who comes up aces nearly two years after suffering his lone career defeat in a May 2018 featherweight title loss to Gary Russell Jr.

The battle of junior lightweight southpaws jumped out to an aggressively tactical start. Farmer dug in and quickly found a home for his jab, working in his left hand quick enough to make sure to slide out of harm’s way whenever Diaz sought to counter. The second-time title hopeful from California found his range late in the frame, scoring with left hands which Farmer absorbed well.

By the end of the first round, Farmer alerted longtime head trainer Raul ‘Chino’ Rivas of an injured right hand. However, he refused to allow it to affect his performance, nor did he use it as the cause for his downfall.

A bout which seemed destined for the scorecards the moment it was announced threatened to end on an injury in round two. Farmer did his best to avoid Diaz’s power shots, dipping his head low only to come in the wrong way. The sequence left Diaz with a finger-deep cut over his left eye, which prompted referee Samuel Burgos—through orders of the Florida commission—to have the doctor examine prior to the start of round three.

“It never bothered me,” Diaz insisted after the win. “I just pretended it wasn’t even there.”

Diaz came out with a sense of urgency, firing off left hands in hopes of forcing Farmer on the defensive. It didn’t immediately take, as the Philly-bred titlist stayed in the pocket long enough to effectively counter in round four. Farmer played defense when necessary, working his way back inside towards the end of the round.

Round five saw Diaz pick up the pace considerably, firing off right hooks and coming back with straight lefts. The desire was there for Farmer to counter but his offense slowed as he began awkwardly blinking his eyes.

The second half of the contest saw Diaz continue his trend of taking the fight to the defending champ. A left hand by the challenger briefly stopped Farmer in his tracks, looking up as if to clear his head and readjust.

Farmer scored with a right hook in the first 30 seconds of round eight, though unable to follow up with anything of substance. Diaz fired back with left hands, and both digging in deep for a fun two-way exchange at center ring.

On the surface, it—along with the journey of making weight—seemed to have taken a toll on Farmer, who was bone dry and breathing heavy. Diaz was the busier fighter throughout rounds nine and ten, laying on Farmer’s chest and taking whatever openings surfaced. Farmer fired back in round 11, rattling off a flurry of punches but with Diaz taking them well and immediately responding with power shots.

After nearly a year’s worth of trash talk, the two boxers found comfort in settling their differences in the ring. Farmer and Diaz embraced at center ring just before the bell to begin the 12th and final round. With the title seemingly within reach, Diaz sought to take the final three minutes, channeling energy through a support system thousands of miles from home. Chants of ‘Jo Jo’ filled the purpose built venue throughout the final round. Diaz responded in kind, doing his best to close the show and then mounting the corner post at fight’s end.

“I respect Tevin Farmer, he gave me this title shot,” Diaz said after the win, running his record to 31-1 (15 KOs). “I know he’s gonna want a rematch and I’ll be more than happy to run it back.”

The two haven’t agreed on anything at all for the past several months, but are on the same page on the topic of once again meeting in the ring.

“We definitely gonna (exercise) that immediate rematch clause,” vowed Farmer. Hopefully we can do it again in April or May. We gotta run it back but he put up a hell of fight.”