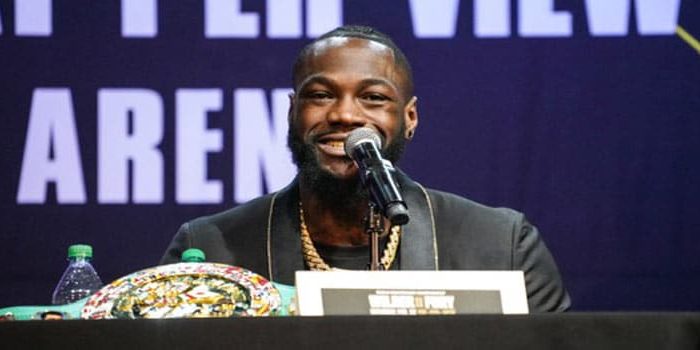 It’s unfinished business like an EPMD album and a calm and confident WBC World Heavyweight Champion Deontay Wilder has promised to finish the job against former unified titlist Tyson Fury.

The Novo by Microsoft at L.A. in Los Angeles could barely contain the two larger-than-life personalities at the inaugural press conference for their rematch, set for Saturday, February 22, at the MGM Grand Garden Arena in Las Vegas, live on FOX Sports pay-per-view (9 p.m. ET/6 p.m. PT).

The last time the two unbeaten heavyweights met, in December 2018, they fought to a split draw in a thrilling affair that was the subject of water cooler talk everywhere.

Both are promising a knockout victory this time.

Fury kicked things off by telling Wilder, “You are going to sleep in two rounds. I keep having the same dream about round two. I am playing poker and I get dealt the number two card. He is getting knocked out in round two, 100%.”

“I want to meet him mano a mano. I won’t run,” he continued. “You won’t have to look for me. You’re going down in two rounds. Two! He’s getting knocked out in two rounds. Laugh about it now but when you’re on your back, looking up at me?”

The bold prediction elicited a chuckle from Wilder, who is considered by many to be the hardest hitter in boxing history.

“When I speak, I say, ‘speak it, believe it, receive it,” said the champion. “But the magic of it all is the belief. And though he’s saying it, I don’t feel that—his energy—that he believes he’s going to do that. If anything, I feel he’s nervous. He’s very scared because of what happened the first time.”

During that first encounter, Fury outboxed Wilder for large stretches but Wilder dropped him once in the ninth and nearly ended the bout with another knockdown in the dramatic twelfth. Fury, seemingly down and out, managed to rise and beat the count.

“When you get knocked out like that and you don’t know how you got there or how you got up, it was the grace of God. That bothers you,” said Wilder. “That not only affects you but it affects your environment and your family as well. Because they know you’re going in again with this monster. And you know what he’s capable of doing. It’s not an act. I knock guys out. Every guy that I’ve faced, I put ‘em down. And it won’t be no different this time around.”

Both fighters have fought twice since. Last June, Fury stopped Tom Schwarz in the second round and then followed it up with a tougher-than-expected unanimous decision win over Otto Wallin, where he suffered a gaping cut over his right eyebrow.

Wilder returned to the ring in May 2019, scoring a highlight-reel, one-punch, first round KO over the usually durable Dominic Breazeale. Then in November, he scored another viral knockout, this time in the seventh round against Luis Ortiz, in a rematch of their March 2018 bout that Wilder won via 10th-round stoppage.

This sequel is the biggest heavyweight bout since Lennox Lewis and Mike Tyson squared off in 2002. Wilder believes the short break between bouts will be key.

And what will be the result?