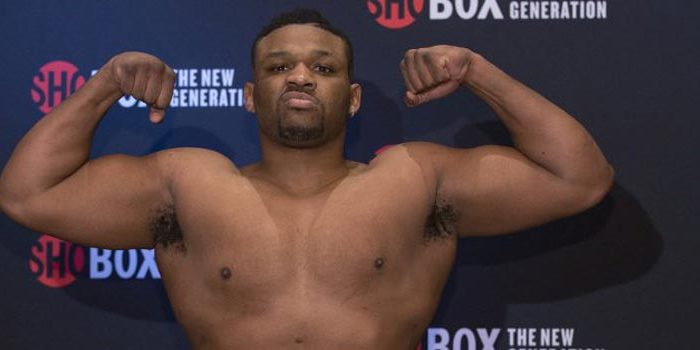 Jarrell Miller has failed yet another performance-enhancing drug test.

BoxingScene.com has confirmed that the besmirched Miller tested positive for an unspecified substance in an exam administered by the Nevada State Athletic Commission in advance of his scheduled July 9 fight against Jerry Forrest in Las Vegas. Brooklyn’s Miller will be placed on at least temporary suspension by the NSAC and has been removed from the Forrest fight.

The 31-year-old Miller’s bout with Forrest was supposed to be his first fight since he tested positive for three PEDs prior to his scrapped heavyweight title fight against Anthony Joshua in June 2019 at Madison Square Garden in New York.

“We are aware of the situation,” Carl Moretti, Top Rank’s vice president of boxing operations, told BoxingScene.com. “He will be placed on temporary suspension by the Nevada State Athletic Commission on Monday morning. We are currently working on a replacement opponent for the main event on July 9th.”

BoxingScene.com has learned that Cameroon’s Carlos Takam likely will replace Miller as Forrest’s foe in a main event ESPN would televise from MGM Grand Conference Center.

Top Rank announced late in January that it had signed the much-maligned Miller to a multi-fight contract, despite his PED ordeal last year.

Miller admitted on social media in the immediate aftermath of failing those tests that he “messed up.” The heavyweight contender was not yet licensed in New York when he failed those tests, however, and thus wasn’t suspended by the New York State Athletic Commission.

The 6-feet-4, 315-pound Miller’s removal from the Joshua fight cost him a compensation package in excess of $6 million. Andy Ruiz Jr. replaced Miller on about five weeks’ notice and pulled off one of the most significant upsets in boxing history when he dropped the previously unbeaten Joshua four times and stopped him in the seventh round to win the IBF, WBA and WBO titles.

Miller seemed unremorseful in the press release to announce his deal with Top Rank.

“Minor setback for a major comeback,” Miller said. “I’m coming for everything and everyone. No one is safe. Say hello to the bad guy. Everyone wants to portray the superhero. We don’t live in a sunshine world. I’ll never be the superhero. In my world, the majority of the time, the villain wins.”

Miller hasn’t boxed since he knocked out Romania’s Bogdan Dinu (19-2, 15 KOs) in the fourth round of a November 2018 bout in Mulvane, Kansas.