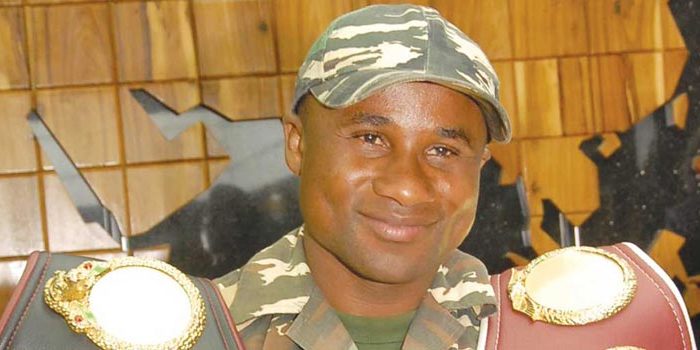 When Namibian boxers face off against Zimbabwean opponents, one thing is for certain: fireworks.

The Harare International Conference Centre will explode next month when top pugilists from the two countries trade leather after a lull in the rivalry because of the ban on sporting activities brought about by the global COVID-19 pandemic.

Madziwana is no stranger to the rivalry with Namibia.

Four years ago he wept inconsolably in the ring as a unanimous decision went against him when he faced Namibia’s super flyweight star Joseph “Smokey” Hilongwa in a World Boxing Federation title fight in Windhoek.

He would get a measure of revenge two years later when he beat Hilongwa in Harare – but there was no title on the line.

And Madziwana knows the stakes will be higher against The Rock.

“I know the Zimbabwe-Namibia boxing rivalry runs deep … I have bitter-sweet memories with Namibian fighters. I have started training for this fight; it’s arguably the biggest fight of my career,” says Madziwana.

“The last time I was involved in a title fight against a Namibian was four years ago when I lost to Hilongwa. I think this is the perfect opportunity for me to redeem myself. I am going all out to win this fight. This is an inaugural belt. I can’t wait for the feeling. Winning the WABA World title will be fulfilling.”

The Rock, with an impressive 27-3-0 record is no pushover.

“Ambunda is a top-notch fighter. He is capable of flooring even the best in his weight category. I will be very cautious but will attack a lot. For now let me train.”

The fight which was supposed to take place as part of Zimbabwe’s 40th independence anniversary celebrations in April was shelved due to the new coronavirus epidemic.

“Preparations are on and we have tentatively planned the event for late July,” said Musonda.

Botswana will also have two fighters involved in this event.

Kagisho Bagwasi will take on Freeman Mabvongwe of Zimbabwe in the welterweight division; while the former’s brother, Steven Bagwasi, takes on Simba Hokonya in the featherweight category.