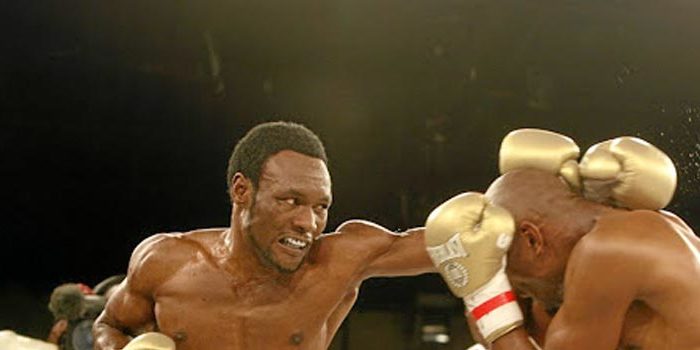 South African-born Lovemore Ndou known as the “Black Panther” is one of the few boxers ever who has gone from a successful boxing career to a successful academic career.

In what is possibly the hardest sport of all, few fighters achieve success as scholars and win world championships; and look after their ring earnings.

However, Ndou, who won three world titles, qualified as a lawyer, and runs his own law firm in Rockdale, Sydney, Australia, is an exception to the rule.

Born on 16 August 1971 in Musina, a mining town in the Limpopo Province where he grew up in a small shack, he still bears the scars and injuries he suffered as young boy, which came about under the days of apartheid in South Africa, when he was imprisoned for 90 days under the law at the time and also received six cuts because a white girl’s father found out that she liked him.

According to reports, he won 66 of his 68 fights as an amateur before making his pro debut on 11 April 1993 at the Nasrec Indoor Arena in Johannesburg, winning on points over four rounds.

He won his next five fights in style before losing on points over six rounds against the more experienced Jeremiah Malinga (13-1-1).

After scoring another four out of five victories he fought to a split draw with Mthobele Mhlope in a challenge for the South African junior lightweight title at the Orient Theatre in East London.

After failing to win the South African title he decided to campaign in Australia and, in his first fight on 24 May 1996, he scored a victory over Antonio Tunacao, who went on to an unbeaten streak of 17 fights in Australia.

I can still remember chatting with Lovemore at the home of the late boxing scribe Peter Moscardi, where he was staying over before departing to Australia.

Little did we know at the time that he would go on to win IBF/IBO and WBF world titles; and attain high qualifications as a lawyer and become an Australian citizen.

In 2003, while in Australia, he began studying at the University of Western Sydney for a degree in law and communications.

After losing only three of his next 14 fights, he hit the big time when he travelled to the MGM Grand in Las Vegas to challenge Puerto Rican Miguel Cotto, who would win world titles at four weights.

He lost on points but put up a creditable performance against Cotto, who was vastly more experienced.

In February 2007 he won the vacant IBF junior welterweight title in Sydney against Naoufel Ben Rabeth and on 11 July 2009 he won his second world title, when he returned to his former home country and scored a 12-round unanimous points decision over local favourite Phillip Ndou for the vacant IBO welterweight title at Emperors Palace near Kempton Park

Lovemore retained the IBO belt on two occasions with a draw against Matthew Hatton and on a return to South Africa he outpointed Bongani Mwelase over 12 rounds.

He had three more fights, losing two, and in his last fight on 10 August 2012 he outpointed Gary St Clair over 12 rounds for the vacant IBF Pan Pacific and World Boxing Foundation welterweight titles to finish with a record of 49-13-2; 30.

After 24 years in Australia, which is now his home country, he was subsequently inducted into the Australian Boxing Hall of Fame

It has also been reported that he is the first world champion boxer to graduate with seven university degrees‚ and is studying for a PhD in law.