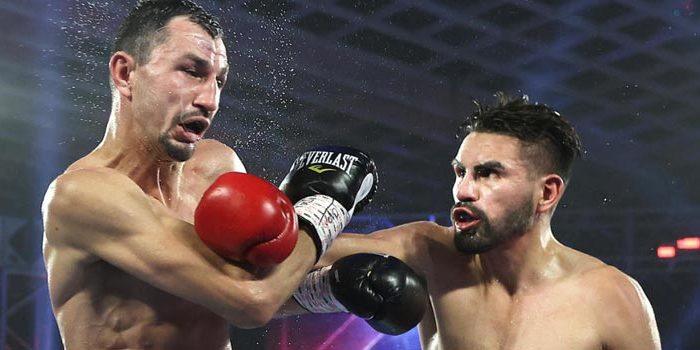 A second half surge from the undefeated 140-pound titlist from Avenal, California proved to be enough to get past former titlist Viktor Postol in earning a majority decision win.

Judge Dave Moretti had the bout 114-114, overruled by judges Tim Cheatham (115-113) and Steve Weisfeld (116-112) who had Ramirez doing enough to retain his titles Saturday evening at MGM Grand Conference Center in Las Vegas.

The bout was a long time coming for both parties, who have each endured three separate training camps and two postponements. They were first due to meet on February 2 in Haikou, China, only to get turned away due to the initial wave of the coronavirus pandemic which was still at the epicenter on site. The global health crisis made its way stateside in mid-March, remaining strong enough to erase a rescheduled May 9 fight date in Ramirez’s home region in Fresno, California.

With that cancellation came the shift from 10,000 of Ramirez’s adoring fans in attendance to a closed-doors title defense in a Las Vegas bubble.

Ramirez opened the fight doubling up on his jab, immediately sliding back before Postol had a chance to counter. Postol was unable to get his own stick working, allowing Ramirez to cut off the ring and work his way inside. The defending unified titlist landed a left hook in the final minute of the round, forcing Postol’s back to the ropes.

Postol enjoyed greater success in implementing his game plan in round two. The former 140-pound titlist was able to stick and move, forcing Ramirez to come forward and repeatedly make him miss. Postol effectively used nearly every inch of the ring, the work put in during the round serving much to the delight of Hall of Fame trainer Freddie Roach.

Ramirez spent much of round three bouncing on his toes eager to uncork his right hand. Postol never gave him that opportunity, as he was able to double up on the jab and move out of harm’s way by the time Ramirez was able to counter.

Round four saw Ramirez connect with a right hand and left hook early on, managing to negate Postol’s constant lateral movement. Postol spent most of the round circling the ring, while Ramirez continued to play the role of stalker, though struggling to get off more than a few shots at a time against an elusive target.

Postol went back to the jab in round five, poking through Ramirez’s tight guard. Both boxers fell well short with the bulk of their power shots, though Postol was occasionally able to follow his jab with a right hand whether upstairs or to the midsection of Ramirez.

Head trainer Robert Garcia had to go through a hellish summer just to make his way to ringside on Saturday evening. Repeated positive tests for COVID-19 kept the renowned cornerman away from fight night for 2019 Prospect of the Year and current welterweight contender Vergil Ortiz Jr. this past July and again last weekend for bantamweight prospect Robert ‘Biggie’ Rodriguez in an undercard bout in this very venue.

On site to instruct Ramirez, Garcia instructed his charge to not give away any more rounds at the halfway point. Ramirez took to the advice, enjoying his best round of the fight to that point. A left hook by the defending champ drove Postol to the ropes, briefly knocking him off balance. A one-two combination by Ramirez pushed its way through as the demand for the same from Postol came from his all-star corner as well.

Ramirez continued to apply pressure in round eight, once again hurting Postol who not only wasn’t landing in combination but no longer offering the steady jab which worked well earlier in the fight. Ramirez used in and out movement to shut down Postol’s offense, save for a right hand which landed down the middle late in the frame.

The latter rounds saw the type of momentum shifts that made both corners sweating out the final decision. Ramirez connected with right hands in round ten as Postol was fighting in reverse.

Postol found his second win late in the fight, though his momentum stalled in an otherwise successful round 11 after time was called to remove loose tape from his glove. The former champ and incoming mandatory challenger was able to land a right hand in his best effort to secure the round on the scorecard.

The marching orders for Ramirez heading into the final round was to let loose and throw punches in bunches. That never happened, as Postol boxed effectively against the defending champ, once again landing his right hand to the body while Ramirez constantly came forward though not always producing the desired effect.

Ramirez improves to 26-0 (17KOs), fighting for the first time since a 6th round knockout of Maurice Hooker in their WBC/WBO unification bout last July in Arlington, Texas. The win marked the fifth overall defense of at least one title dating back to his March 2018 points win over Amir Imam.

Postol falls to 31-3 (12KOs), snapping a two-fight win streak. The latter of the two came in a 10-round win over Mohamed Mimoune to become the mandatory challenger to Ramirez’s WBC title last April.

All three defeats have come against current champions in Ramirez, Terence ‘Bud’ Crawford (July 2016) and Josh Taylor (June 2018), the latter coming before Taylor has since emerged as Ramirez’s chief rival and fellow unified 140-pound titlist.

A lot of talk has come of a head-on collision between the two, though a fight that would have to take place in front of fans. Ramirez is willing to add a new twist to that plot.

“I want to fight him in the U.K.,” Ramirez insisted to ESPN’s Bernardo Osuna. “The fight deserves to be in a big stadium in front of the U.K. fans.”