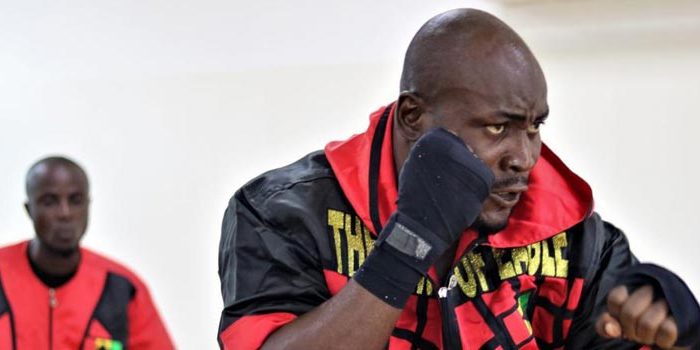 Richard Harrison Lartey may be a professional heavyweight boxer but his biggest fight is taking place outside of the ring.

Lartey, who hails from Accra, Ghana, is scheduled to face Brit Nathan Gorman on October 10 in the United Kingdom.

The Gorman bout is a major opportunity for Lartey, who hasn’t fought since suffering an April 2019 loss to Daniel DuBois in DuBois’ native UK.

There was a time when Lartey wasn’t sure he’d fight again, let alone fight abroad. It all began in March 2019, when he agreed to fight DuBois, a rising undefeated heavyweight prospect rumored to have knocked out Anthony Joshua in sparring.

DuBois was a big favorite, a talented specimen who American heavyweight Deontay Wilder once singled out as a prospect with championship potential. Lartey, on the other hand, had fought primarily in Accra.

Lartey sensed something was amiss when his management team, local-based Cabic Promotions, presented the fight to him.

“So many things happened before we left Ghana for the fight with Dubois,” Lartey told BoxingAfrica.com. “My managers refused to give me my contract to sign.

“They signed my part and told me the purse was £20,000. But I insisted on seeing the contract.”

Copies of the fight agreement should have been provided to Lartey, Cabic and the Ghana Boxing Authority (GBA), the national governing body which reviews such contracts and issues release letters for boxers to fight abroad.

Lartey was the only one who didn’t receive a copy.

“When I refused to apply for the visa without the contract, we held a meeting and they confessed to me that the purse was £50,000,” said Lartey.

“I realized my managers underdeclared £20,000 to the GBA to get the release letter for the fight and I kept wondering how they could have done that and what role did the GBA play if they saw the contract.”

Ultimately, Lartey decided to proceed with the bout. However, his concerns increased when he learned that his trainer would not be accompanying him to the UK.

Lartey says his managers couldn’t adequately explain why they did not secure a visa for his trainer. However, it is common practice, particularly in Ghana sports, for handlers to obtain visas for international competitions – not for those involved, but to sell to other citizens eager to travel abroad.

Suspecting foul play, Lartey decided to use the situation to his advantage.

“I got to the UK on Thursday and had to fight on Saturday,” said Lartey. “At the weigh-in, I met Queensberry Promotions, promoters of the card.

“I started talking to the promoters and blaming them for my trainer not securing a visa for the fight. That was when I asked for a copy of the contract of the fight from the promoters.”

Lartey received a copy from Queensberry. He also gave a good account of himself versus DuBois, rocking the house favorite but was stopped in four rounds. Lartey believes with adequate training, more time to prepare and minus the distractions, he could have sprung a surprise.

Little did he know, his fight was only beginning.

The monies for the fight, £50,000, per the contract, was wire transferred to Cabic Promotions. According to Lartey, their managerial contract with him stipulates they take 33% of the purse, which would be £16,500, leaving Lartey with £33,500. However, when Lartey returned to Ghana, Cabic offered him only £10,000.

The financial tussle led Lartey to reach out to the GBA to redress the situation. Nearly 1.5 years later, they still haven’t rendered a verdict, only deepening Lartey’s suspicions regarding them.

“I don’t trust the GBA anymore because of the way they have handled this issue,” said Lartey.

“I still don’t understand why the GBA can’t rule on the matter when Cabic underdeclared the purse to them for the release letter.”

Multiple calls from BoxingAfrica.com to the GBA weren’t returned.

“It’s been over a year and six months since we came from the Dubois fight and Cabic are yet to fulfill any of the contractual agreements,” said Lartey.

“I don’t have a contract with them anymore because they haven’t fulfilled their part of the contract.”

But Cabic Promotions declares otherwise, insisting that they have a valid three-year contract with the fighter.

Ivan Bruce Cudjoe, CEO of Cabic Promotions, explained that his outfit was waiting on the GBA to rule on their case before making a decision on the boxer.

“We are not aware of any upcoming fight involving Lartey even though we still represent him,” Cudjoe told BoxingAfrica.com.

In the meantime, Cabic Promotions submitted a letter to Lartey through the GBA, stating that Lartey would have to pay £5 million in order to terminate their contract with him.

BoxingAfrica.com has seen a copy of that letter, dated September 5, 2020. Lartey says such claims are absurd and without basis.

“What am I supposed to pay that money for? You owe me so much and have the effrontery to demand money from me,” said Lartey.

“I don’t think they are serious people. They don’t know what they are about. My main focus now is to focus on training for the Gorman fight.”

The Gorman fight came about through direct negotiations between Lartey and Frank Warren’s Queensberry Promotions. At the time of this writing, Cabic Promotions is not involved in any capacity. Nor has a verdict been rendered by the GBA regarding the on-going case in Ghana.

On September 24, 1994, Oliver McCall shook up the heavyweight division with a stunning second-round KO of the heavy favorite Lennox Lewis at Wembley Arena.