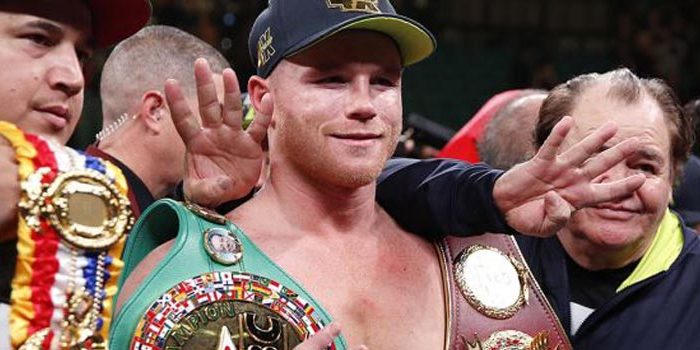 In a bombshell announcement, pound-for-pound and box office king Saul ‘Canelo’ Alvarez revealed that he will move forward with the rest of his career without the services of Golden Boy Promotions, his longtime promoter. Eddy Reynoso, Alvarez’s head trainer has assumed full control of his career and alerted the boxing world of the news.

The move seemingly puts to an end a massive lawsuit filed by Alvarez against his estranged promoter, Oscar de la Hoya specifically, along with DAZN-USA and accompanying partners. Guadalajara’s Alvarez (53-1-2, 36KOs) filed a complaint against all parties, seeking damages in excess of $280 million—the remainder of an 11-fight, $365 million contract inked in October 2018 for the superstar boxer to take his services to the upstart sports streaming service.

While the case remains active on the public docket, all parties now insist that they are free to head in a different direction.

“The lawsuit was resolved to everyone’s satisfaction, and we wish Canelo the best going forward,” Oscar de la Hoya, founder and chairman of Golden Boy Promotions told BoxingScene.com in a prepared statement.

One last attempt for all sides to move forward came in the final meeting between all parties.

According to multiple sources with intimate knowledge of such talks, a soft date of December 19 was set aside for Alvarez to face either of England’s two unbeaten super middleweight titlists Callum Smith or Billy Joe Saunders. With it came an offer of a guaranteed payday just north of $20 million plus a percentage of subscriptions generated from the one-off event.

Sources informed BoxingScene.com that Alvarez and his team instead demanded to be paid the contractually-specified $35 million, leaving the parties at a standstill.

As for Golden Boy, the next step is to continue to work with DAZN, a relationship which seems to remain intact.

In addition to Alvarez, Golden Boy brought over its entire stable of more than 80 boxers to DAZN in a separate five-year deal. The exact terms without the benefit of delivering Alvarez remain murky as this goes to publish, although multiple sources have informed BoxingScene.com that talks are underway for the two sides to ensure that they continue to do business together whether in present form (sans Alvarez) or under a restructured pact.

Sports Illustrated’s Chris Mannix was the first to report such talks between Golden Boy and DAZN.

“In strong partnership with DAZN, we will continue showcasing our wide array of talent, including rising superstars like Ryan Garcia, Jaime Munguia and Vergil Ortiz Jr., all of whom have the talent and potential to become the next biggest star in our sport,” notes de la Hoya.

Golden Boy has presented two shows since the pandemic, the most recent of which came on October 30 with Munguia scoring a 6th round stoppage of Tureano Johnson.

The next show in the partnership will come December 5, with Ryan Garcia (20-0, 17KOs) and England’s Luke Campbell (20-3, 17KOs) colliding in a 12-round interim lightweight title fight. The event will help kick off the long-delayed but now official global launch for DAZN in more than 200 markets beginning December 1.

Meanwhile, industry rumors suggest Alvarez is eyeing a December 19 ring return, with unbeaten titlist Caleb Plant as the targeted foe according to ESPN Deportes. Plant is advised by Premier Boxing Champions (PBC) head Al Haymon. The bout would likely occur on a PBC platform, either SHOWTIME or FOX.

Whichever direction Alvarez next heads, it will be on his own terms. No such clause exists which would allow DAZN and Golden Boy to simply match his best offer in order to retain his services on its platform, as Alvarez is a true network and promotional free agent at this point.