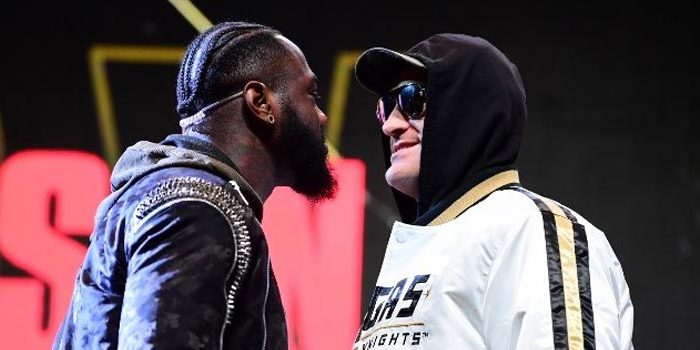 The Daily Star’s Chris McKenna was the first to report the official ruling.

The case was sent to arbitration in late 2020, upon the collapse of a planned third fight between England’s Fury (30-0-1, 21KOs) and Alabama’s Wilder (42-1-1, 41KOs). The two met last February 22 at MGM Grand Garden Arena in Las Vegas, with Fury scoring a seventh-round stoppage to win the WBC heavyweight title and restore the heavyweight championship lineage that was broken upon his departure from the sport months after a 12-round win over Wladimir Klitschko in Nov. 2015.

Terms of the rematch—which came nearly 15 months after Wilder and Fury fought to a 12-round draw in their December 1, 2018, clash at Staples Center in Los Angeles—came with a bi-lateral clause which allowed for the losing party to call for the third fight.

Wilder exercised that clause roughly a week after their joint ESPN/Fox Sports Pay-Per-View event, which set the Vegas record for the highest live gate produced for a heavyweight championship fight. The event generated $16,916,440 in ticket sales, surpassing the state’s previous best set by the November 1999 rematch between Lennox Lewis and Evander Holyfield at Thomas & Mack Center in Las Vegas.

Fury had been in talks to face Anthony Joshua but those talks had been ongoing for nearly a year and, despite reports that they had finalized the deal (including one such declaration from Fury on Sunday), there had been no official announcements as there were still issues securing the money for the fight from Saudi investors—not to mention clauses in said agreement that would have been a non-starter.

Wilder was prepared to go through with the Fury fight last December, only for Fury and Hall of Fame promoter Bob Arum to insist that the contractual clause expired last October. Fury then teased the possibility of taking a stay busy fight last December 5. This never happened.

The false narrative was repeatedly floated that Wilder didn’t have a legal leg to stand on, which is obviously contradicted by Monday’s ruling.

Top Rank representatives as well as Shelly Finkel, Wilder’s career-long manager declined comment, per the terms of the gag order surrounding the case.

The expectations from Wilder’s side will be to pursue a third fight in order to avenge his lone career defeat. The fighting pride of Tuscaloosa, Alabama claimed the WBC heavyweight title via 12-round unanimous decision over Bermane Stiverne in Jan. 2015 at MGM Grand. The win saw Wilder end a seven-plus year drought from the last time an American heavyweight held a piece of the heavyweight crown, when Shannon Briggs’ brief reign ended in June 2007.

Wilder made 10 successful defenses of the title, nine ending in knockout. The lone title defense to go the distance came in the first fight with Fury, who survived knockdowns in rounds nine and twelve to make it to the final bell only to have to settle for split decision draw.

A rematch was expected to take place in May 2018, only for Fury to call an audible prior to the contracts being signed as he instead agreed to a promotional deal with Top Rank and ESPN+. Two non-title fight wins followed for Fury before moving to the rematch with Wilder last February.

A decision will have to be made to appease all parties, presumably sooner rather than later. Any fight other than one with Fury will put Joshua on the hook to next face WBO mandatory challenger Oleksandr Usyk.