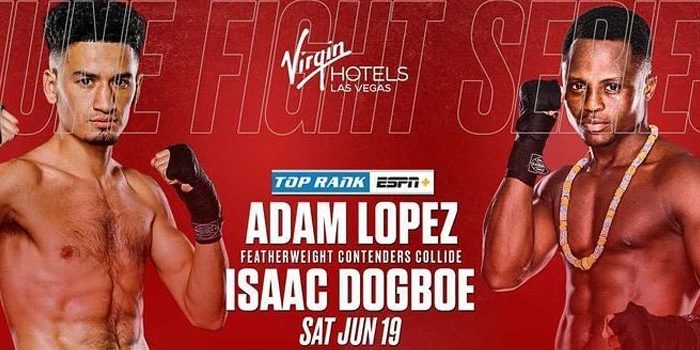 Isaac Dogboe has set his sights on another world title shot but his next opponent has the same aspirations.

Ghana’s Dogboe will take on Adam “BluNose” Lopez Saturday, June 19, at The Theater at Virgin Hotels Las Vegas. The 10-round featherweight battle will be available via stream on ESPN+ and is part of the undercard for the headlining event featuring undefeated WBA and iBF World Bantamweight Champion Naoya Inoue against mandatory challenger Michael Dasmarinas.

The 25-year old Lopez has impressed while winning two straight following a controversial stoppage loss to Oscar Valdez in September in December 2019, a bout where Lopez dropped the undefeated two-division champion. The Glendale, California is a skilled boxer with good stamina and a high work-rate.

A win over Dogboe puts Lopez (15-2, 6 KOs) back into world title contention.

“Dogboe is a former world champion who always comes to fight,” Lopez said. “But I’m a different fighter now, and I know what a win would mean for my career. I’m coming to Las Vegas to steal the show.”

Dogboe (21-2, 15 KOs) hopes to do the same. At 26, “Royal Storm” is entering his prime. It’s been three years since he took the boxing world by surprise with his TKO win over Jessie Magdaleno to win the WBO world 122-pound belt. Dogboe made one defense of his title before relinquishing it to Emanuel Navarrete via unanimous decision in December 2018.

A May 2019 rematch with Navarrete only confirmed what occurred the first time. Dogboe regrouped, switching from long-time trainer and father Paul Dogboe to the respected Washington, DC duo of Barry Hunter and Patrice Harris.

In their first fight together, Dogboe turned in one of the most complete performances of his career, stopping Chris Avalos in eight rounds in August 2020.

Now he takes another step forward as he prepares to face an equally hungry Lopez in a battle sure to produce fireworks.