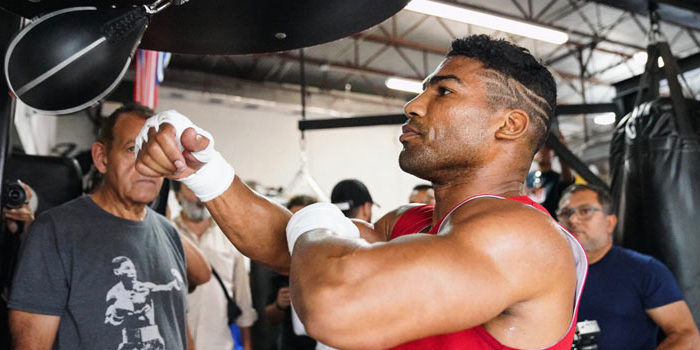 Gamboa will face undefeated WBA interim-super featherweight world champion Chris Colbert (15-0, 6 KOs), another talented young boxer who is on the rise, in a Showtime televised main event on July 3rd.

Salas is very pleased to return to the corner of Gamboa.

He’s been keeping a close eye on Gamboa’s most recent fights, which were defeats at the hands of Gervonta Davis and Devin Haney.

The veteran coach plans to bring Gamboa back to his roots.

“Gamboa and I have always been in communication. I’ve always followed his fights. I remember watching his fight against Gervonta Davis and my son burst into tears at the end. I saw his fight against [Devin] Haney and I gave my take. And I told him he’d lost his secret,” Salas told George Ebro.

“[The secret] is on his feet. For some reason he lost his explosiveness. One day he sent me a video of him training and asked me what I thought. I told him I was afraid he’d fall. I jokingly told him I was going to buy him a walker. He asked me if we could get back together and I replied that there were no problems for me.

“He explained to me that he was going against that boy [Colbert], which is going to be a very tough fight, because he’s a boxer who’s coming up and wants to take Gamboa’s name as a step [to the top]. It’s a challenge. Despite the age, Gamboa is very dedicated. He didn’t have a smart guide. [in his prior bouts].

“[To get Gamboa back on top would be] a dream. Every coach has as a gift to see how the boxer does things above the ring. With Gamboa we have to go back to a lot of things we did in Cuba. We won the fights [with the work we did] at the gym.”