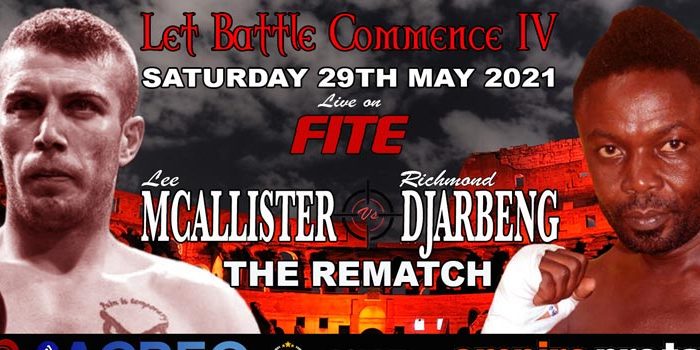 This coming Saturday, 29th May 2021, Aberdeen’s six time, five division World Champion Lee McAllister returns to the ring in his home city for the first time since October 2019, and is set to go toe-to-toe with Ghana’s Richmond Djarbeng, the very same opponent he fought and beat to lift the World Boxing Union (WBU) and Professional Boxing Council (PBC) World crowns back on the 5th October 2019.

Back in March McAllister travelled to Ghana, where he fought and beat Collison Corley, much to the chagrin of Djarbeng, who clearly felt it should have been him, as the Ghanaian had been calling for a rematch ever since the 2019 defeat.

Djarbeng claimed he had broken a finger during his preparations for the title clash and should not have fought, but chose to still do so rather than ruin the show, which was also promoted by McAllister.

Following GNA Sports interview with Djarbeng, where the Ghanaian pleaded his case for a rematch, following McAllister’s victory over Corley in March, McAllister decided to offer the Accra based fighter the requested rematch, either in Aberdeen in May or Ghana in July. Djarbeng chose the former.

“Can’t wait to be back fighting in my home town again, I’ve not boxed in Aberdeen since late 2019, so am buzzing to get back in the ring and continue to put my city on the boxing map.

“Richmond feels that he was at a disadvantage because of the injury last time we fought.

“Following my fighting in Ghana back in March, he threw down the gauntlet in an interview, claiming he can beat me if we fought again.

“His main argument seems to be that since we last fought he’s won both his fights by stoppage, and he thinks he can do the same against me now he’s fully fit, so I decided to let him try.”

Lee McAllister versus Richmond Djarbeng – The Rematch, will headline the globally broadcast LET BATTLE COMMENCE IV, in association with ACREO, Bounty Competitions, Empire Pro Tape and Go Sports & Entertainment, on the 29th May.

LET BATTLE COMMENCE IV, is the fourth instalment of the all action series that was developed to provide professional boxing competition created for TV during the global pandemic in 2020.

The stellar undercard of McAllister Vs Djarbeng – The Rematch on the 29th May 2021 LET BATTLE COMMENCE IV features:

LET BATTLE COMMENCE IV, in association with ACREO, Bounty Competitions, Empire Pro Tape and Go Sports & Entertainment, is headlined by Lee McAllister versus Richmond Djabeng – The Rematch and will take place behind closed doors at the Northern Hotel, Aberdeen on the 29th May 2021 and will be broadcast live and free to view on FITE and VIVA LIVE TV as well as further linear and digital channels globally (please check local listings)