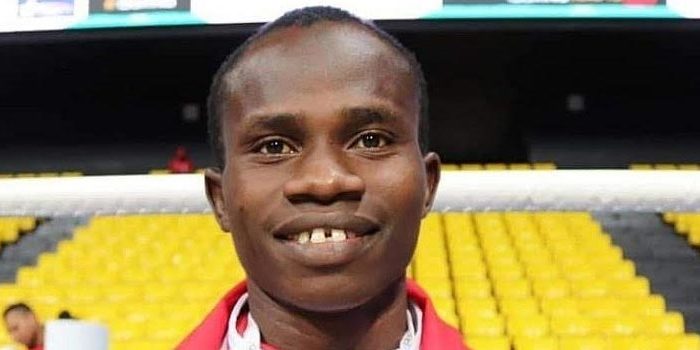 At age 28, most fighters are in the middle of their primes. For Sulemanu Tetteh, 28 represents a new beginning.

Tetteh will compete for his native Ghana at the Tokyo Olympic Games in July. It’s the second time Tetteh has fought at the Olympics. This time, the Accra native is hoping for a strong showing in the flyweight class and then to turn pro afterward.

It has been a long road for the Ghana Prisons Officer, who had to choose from two sports – boxing and track & field – as a youngster growing up in the slums of Jamestown.

Tetteh discovered boxing at age nine through his maternal uncles, Mohammed Akrong and Issah Akrong, both of whom were both professional fighters at the time.

The Akrong brothers trained at the Spartan Gym in Accra and would take Tetteh along with them. It wasn’t long before their nephew began lacing up his own gloves.

“Growing up, I was always determined to make it through boxing,” Tetteh told BoxingAfrica.com. “It was a dream because I had two uncles who were both boxers who were determined to help me.”

“He was a very smart kid growing up and that really made it easier for us training him,” Issah Akrong said during an interview with BoxingAfrica.com from his Canada base.

After several training sessions at the Spartan Gym, Tetteh was ready to fight but could not make the required weight for boxing as he was too small. He wouldn’t box again for five years, choosing instead to concentrate on track and field.

Tetteh proved to be a natural runner. He won two national under-15 marathons, feats which nearly made boxing a distant memory. However, when Tetteh attempted to win a third under-15 title, he found himself at odds with organizers who argued that he was older than 15 despite documents which showed otherwise.

“We decided to bring him back to boxing when he was disqualified from competing in the marathon in 2007,” said Issah Akrong.

The old Spartan Gym had closed so Tetteh joined his uncles to train under Kwasi Ofori Asare at the Wisdom Boxing Club.

Under the guidance of Asare, who also coaches Ghana’s national boxing squad, the Black Bombers, Tetteh qualified for the London Olympics in 2012. He would lose to Puerto Rico’s Jantony Ortiz in the first round.

Despite these significant achievements, Tetteh failed to qualify for the 2016 edition of the Olympics in Rio de Janeiro, Brazil. Instead of turning pro, Tetteh is aiming to finish out his amateur career on top.

“He has spent so many years as an amateur and I want him to bring his experience to bear during the games,” said Asare. “I feel there is still a future for him at the pro ranks despite his age, but he must decide on what to do after the Olympics.”

Tetteh says his decision to continue fighting in the amateur ranks was due to his inability to find a credible manager for his pro career.

“I don’t think my age will be a problem when I turn pro because I believe I can be a world champion with the right handlers in the coming years,” Tetteh declared.

“That will be the focus after the Olympics so I can have a management team to handle my negotiations and promotions.”

For now, Tetteh’s uncles will handle management duties following the Olympics. The only thing left is for him to leave Tokyo wearing a medal around his neck.

“I learnt a lot from the 2012 Olympics and I am much more experienced now,” said Tetteh “I believe with the best of preparation, I will be in shape to win a medal for Ghana.

“I have really improved over the years, and I am committed to winning laurels for the country. This is an opportunity for me to make a name for myself and I want to take it.”