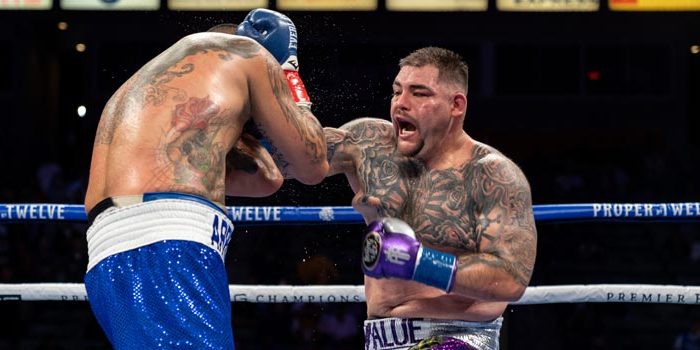 “Chris is a veteran and a hard puncher,” said Ruiz. “We did what we had to do tonight. We got the victory that we wanted. I was at my lowest point and now I have to climb the ladder again. I’m thankful for the victory and I’m ready to move on to the next.”

The battle between boxing’s two greatest Mexican-American heavyweights in Ruiz (34-2, 22 KOs) and Arreola (38-7-1, 33 KOs) began with fireworks, as the underdog Arreola landed a powerful overhand right that forced Ruiz to touch the canvas and earned Arreola an early knockdown on the cards. Ruiz was able to recover and survive the second round, taking the knockdown as a wake-up call and prompting him to initiate numerous big exchanges in the third round.

“He got me with a good clean right hand in the second round,” said Ruiz. “I was too overconfident and dropped my hand a bit. Hats off to him. We just kept pushing and pushing. I switched up and started focusing on counterpunching and working the body.”

Both men tasted power punches in a raucous third round that saw Arreola land 14 power punches to Ruiz’s 13, according to CompuBox. Ruiz adjusted as the fight went on, and found success scoring with body shots and combinations punctuated by a punishing sweeping left hook.

Big punches and lots of heart. This fight is everything we knew it would be. #RuizArreola

🥊 @Andy_destroyer1's combinations have been on point in the later rounds!

Ruiz owned a 106 to 75 advantage in power punches landed and built up his lead on the cards by landing 161 of his 626 punches thrown, to Arreola’s 109 landed and 521 thrown. Arreola appeared to hurt his left arm in round eight, but was able to manage any pain enough to continue throwing bombs until the final bell.

Ruiz punctuated his performance with a strong final round, clinching his victory in the WBA Heavyweight Title Eliminator by the scores of 117-110 and 118-109 twice in the eyes of the judges.

“I respect the judges, but I guess beauty is in the eye of the beholder,” said Arreola. “He might have won, but don’t tell me I only won two or three rounds. I got hit in the shoulder and it kind of threw it off. It wasn’t a big deal though. It’s a part of boxing. I didn’t take too much punishment. I’m ready to run it back with Andy.”

“I felt a little rust and I know other fighters can relate to that,” said Ruiz. “If he wants to run it back, we’ll run it back with him.”

Figueroa came out showing off a herky-jerky style and had success in the first round, out landing Ramos slightly with 12 power punches to Ramos’ 11.

“Omar is a very tricky fighter,” said Ramos. “He has an awkward defense and it was hard to catch him clean at first, but the fight overall went as planned.”

As the fight hit round three, Ramos appeared to figure out the timing of his opponent and began unloading a lethal right hand that he would eventually ride to victory.

That third round saw a significant bruise begin to develop under Figueroa’s left eye as a result of that Ramos right hand. Ramos kept up his momentum during rounds four and five, while Figueroa came out aggressive in round six, winging big power shots looking to turn the tide back in his favor.

“We trained hard for this fight and I felt good heading into the ring,” said Figueroa. “I’m disappointed I came up short. My body just wouldn’t respond like I wanted it to.”

“We trained to attack the body,” said Ramos. “Our plan from the beginning was to pressure him. We wanted to score points to the body. I could hear him groaning and I knew once I hurt him bad, that the fight was over.”

In between the sixth and seventh rounds, referee Jerry Cantu waived off the bout, at the suggestion of Figueroa’s corner. Ramos was the busier and more accurate fighter, out landing Figueroa 150 to 74, with a 34% to 24% edge in accuracy.

“I trained so hard for this fight,” said Ramos. “I knew my career was on the line. I knew I needed a win and I knew Omar would bring a good fight. I’m glad to be back on the winning side and I’m ready to take on the best of the division.”

“I’m extremely grateful to fight in front of the fans tonight,” said Fundora. “It was fun to hear the cheers, the boos and everything. I’m honored to be in this position.”

Fundora and Cota stood toe-to-toe from the opening bell, throwing big punches and marking up each other early. Fundora landed 29 and 28 power punches in the first two rounds, with Cota connecting on 15 and 17.

“It was a good trading fight,” said Fundora. “We were hitting each other, but my punches were doing more damage and that’s why the referee eventually stepped in. I think he could have been stopped earlier in the round. I just kept fighting until the end.”

The fight was fought at close range for 90% of the action, with each fighter showing off impressive in-fighting skills. Fundora was able to up his work rate significantly in the third and fourth rounds, landing 42 punches in each, every single one a power shot.

The fourth round saw Fundora break through with a big shot that appeared to finally daze Cota. Fundora pushed forward aggressively to look to send Cota down, while Cota was still able to wing his own power shots despite his impaired state.

“I saw his leg wobble in the first round, but he took it and kept coming,” said Fundora. “The second time I saw it, I knew I had to go for the kill.”

A final powerful left hook that Fundora landed finally prompted referee Ray Corona to stop the bout at 2:35 of the fourth round. Cota disagreed with the stoppage, while Fundora set his sights on future big fights in the 154-pound division.

“It was a bad stoppage,” said Cota. “I felt like they stopped the fight early considering I had just landed a big punch. Too fast, too soon. The fans expressed their feelings. They were clearly upset by how the fight ended. That’s why I raised my hands. There is plenty more of Cota to come in the future.”

“My message to the rest of the division is that we’re here,” said Fundora. “If you’re ready for war, we’re ready to take it. Bring it on.”

“It was my second time going the distance and that’s what we wanted,” said Ramos. “We love knockouts, but we’re glad at this point in my career that I got the experience. I thank Molina for taking the fight, he’s a great fighter.”

Facing his toughest competition to date, the 20-year-old Ramos imposed his physicality from the outset, peppering Molina with jabs and following up with hard left hands. Ramos mixed in shots to the body as the fight went on, holding a 68 to 11 advantage in body shots landed.

“I might have been looking for a knockout too much in the early rounds,” said Ramos. “I got used to it and I settled down and I felt like I was breaking him down little by little. He was trying to survive a little bit, so it made it harder to get the knockout.

“My father told me to invite him to come to me. We were pressuring him to start. My dad had me change it up. He came in a little bit, but then he backed off. That’s how I tried to counteract his movement.”

Molina found some success with counter hooks, although he was unable to seriously hurt his opponent. Referee Gerard White deemed some of Molina’s shots were hitting Ramos in the back of the head, and deducted a point late in the seventh round.

“I was sad because I lost, but this was a good fight against an aggressive opponent,” said Molina. “I couldn’t let him pressure me. The weight was a factor for me. I definitely felt the size difference”

Ramos held the overall edge in the punch stats and was the busier fighter throughout, out landing Molina 135 to 77. After 10 rounds, all three judges saw the fight in favor of Ramos, by scores of 97-92 and 99-90 twice.

“I learned a lot today,” said Ramos. “I’m going to keep building on that. I feel like I have a lot of momentum. It was a big step up for me and I feel like I showed a lot. I showed I have good conditioning and good movement along with my power.”

“He said at the press conference that he was going to knock me out, but he ran right into that punch,” said Lara. “Maybe he was overthinking it all along.”

Cuba’s Lara became a three-time, two-division champion in his middleweight debut, after an extended run as one of the 154-pound division’s elite fighters. Lara found a home for his left hand early in the first round, and eventually timed a perfect one that caught LaManna and sent him to the mat. Referee Thomas Taylor immediately jumped in to halt the bout at 1:20 into the round.

After the triumph, Lara expressed his desire to seek out the biggest fights at 154 and 160-pounds.

“I felt strong and sharp tonight at middleweight, but I still want all of the big fights at 154-pounds too,” said Lara. “I want the winner of the Jermell Charlo-Brian Castaño unification fight. (WBC Middleweight Champion) Jermall Charlo is like family, we worked in the same gym for years, but this is a sport and I’d welcome the challenge.

“I feel great physically. I’m going to keep doing this until my body tells me I can’t do it anymore. I don’t feel like I’ve taken a lot of punishment in my career and I know I have at least another three years of my prime left.”

“You have to have a stone-cold mindset, and that’s what we had to finish Avelar off,” said Ramirez. “We were able to connect the right combinations to finish the fight off exactly how we wanted.”

The fight heated up in round two, with both fighters landing over 20 punches and throwing at least 80. Ramirez broke through in the third with a sweeping right hook that put Avelar down early in the frame. Avelar was able to get to his feet, but again ran into a Ramirez right hook that left him staggered and seemingly out on his feet, prompting referee Gerard White to waive off the fight 1:16 into the round.

“I am beyond happy right now,” said Ramirez. “I’m just elated and moved by having been able to fulfill the promise I made to my baby boy Eduardo Ramirez Jr. He just turned two years old and I wasn’t able to be there to give him a hug for his birthday, but I had promised him that I would bring the title back home to him as a gift, and that is exactly what I’m doing now.

“This was a perfect coronation. To be honest, I would now like to have the chance to fight against Leo Santa Cruz. I previously fought against Miguel Flores, who barely lasted four or five rounds against me, but Leo couldn’t knock him out. This convincing knockout should be my ticket to have that opportunity”.