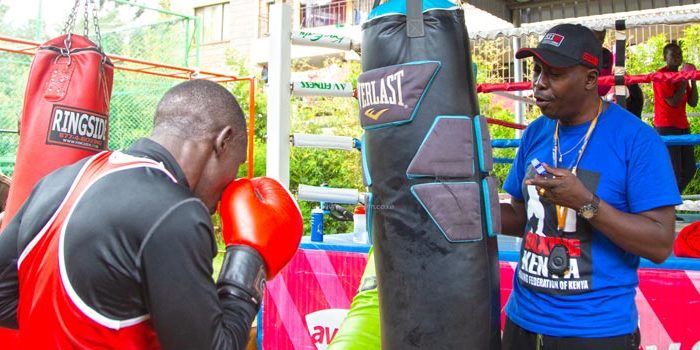 Tactician Musa Benjamin has described the Tokyo Olympics boxing draw as one of the toughest in his coaching career, but the tactician has noted that the outcome of the drawing of lots in Tokyo will call for determination and focus.

Despite the tough bouts expected, Musa says his boxers will give it their best shot no matter what.

“We know that to become champions we have to defeat champions; so we are ready to take them on, I believe the harder the battle the sweeter the Victory!” Musa said.

Team Manager Duncan Kuria shared similar sentiments saying: “I think we got a tough draw but again these are the Olympics! You have to beat the best to be the best and all my boxers have a chance to book a date with destiny when they step into the ring to harvest the fruit of their labour. I Am very hopeful that they will all give their very best and make Kenya proud.”

Captain Nick Okoth aka Commander will kickstart his campaign in the blue corner against Erdenebat Tsendbaatar of Mongolia on Saturday in the featherweight category. This will be a round of 32 bout.

Elly Ajowi and Elizabeth Akinyi will punch off in rounds of 16. Ajowi will step onto the canvas on Tuesday, starting off in the blue corner and will trade punches with Cruz Julio of Cuba in the heavyweight division.

At the same time, Akinyi will square herself in the Red Corner and will take on Panguana Alcinda Helena of Mozambique.

Meanwhile, flyweight pugilist Christine Ongare will start off in the round of 32 in the blue corner against Magno Irish of Philippines on Sunday.

Captain Okoth says the team is bullish and will not falter or fear despite the tough draw.

“I know my opponent, but he doesn’t know me, where was he in Beijing in 2008 when I was doing my debut in Olympics? It’s a fallacy to say he is more experienced. My coaches will be with me in the corner and I will be executing what we have been training for the last two years. I will show my ability on Saturday,” a confident Okoth beamed.

Elly Ajowi also bantered:  “La Cruz might be a four-time world champion and an Olympic champion but that was in light heavyweight. He is very beatable. During the 2019 world championship he lost, I have nothing to lose against him come Tuesday he will not have anywhere to run. He is going to meet his waterloo.”

Akinyi on her part said: “I have fought against Alcinda before during Zone 3 Championship in Kinshasa Congo and lost on points. I have prepared better and I believe I will defeat her this time round when it matters the most”.

Ongare says she doesn’t know much about her opponent who is from Philippines.

“I am focusing on dealing with her in the ring whichever way she comes. I Am ready to make history by being the first Kenyan woman to win a boxing medal at the Olympics.”