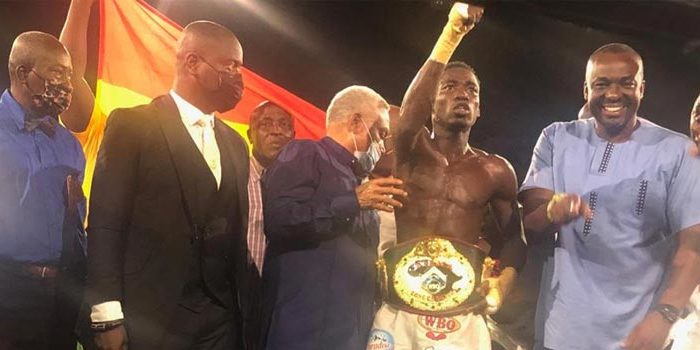 “I was not treated fairly at all because this is a professional bout and not amateur and cuts are normal,” said a disappointed Nataneal after the fight. “I I was fine despite the cut and I haven’t seen anywhere else in this world that a referee will stop a fight just because of that.

“All the same, I want to congratulate the new champion. This is sad and I want a rematch to settle the scores because I am very disappointed. My people back home saw what happened and they know I didn’t lose on fair grounds.”

“This is normal for fighters when they lose but I am a doctor and I have to do my job,” he told BoxingAfrica.com. “I understand his frustrations because he was the champion and lost but the cut was deep and he kept bleeding.

“I had to ask the referee to stop the fight before it affects his brain, which might be dangerous. I did my job and every medical practitioner would have done the same.”

The fight itself was just beginning to heat up when it was halted. Laryea started strong, winning the first with combinations that excited his kinsmen ringside.

In round two, the tide swiftly turned as the Namibian launched a two-fisted attack to the head and body, applying steady pressure. It was more of the same in the third as Laryea was forced on his heels. However, a single right from Laryea that round opened the cut.

The Ghanaian went back to boxing in the fourth as Nataneal continued to press forward. After inspecting the cut earlier in the frame, Dr. Quaye motioned for another look. Moments later, it was all over.

“I am happy that I made every member of my team proud despite so many people saying I wasn’t ready for this challenge,” said Laryea.

“I have to work harder in subsequent fights to ensure I successfully defend my title. This is the moment I have been waiting for and I promise never to disappoint.”

The show was promoted by the Ghana Boxing Authority (GBA) in conjunction with Bronx Boxing Promotions.

In a catchweight contest, Tackie Annan finished off Amadu Seidu via eighth-round KO and Eric Korley stopped Benjamin Sackey in three rounds during a flyweight contest.

Sherrif “One Time” Quaye stopped Benjamin Ankrah in four rounds to win a lightweight contest while Richard Dogbegah lost a four-round TKO to Jacob Laryea in a super welterweight contest.