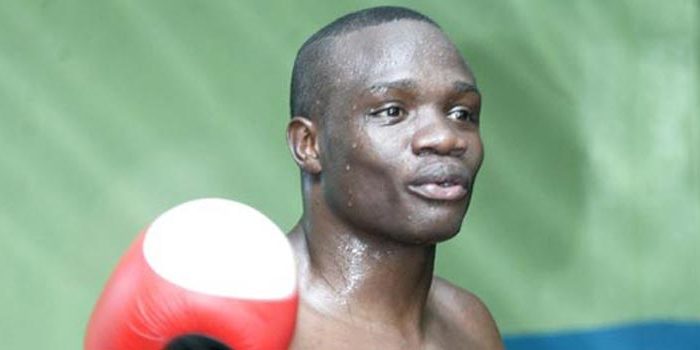 Kenya’s Africa middleweight champion Rayton Okwiri (5-0-1, 4 KOs) returns to the ring on Saturday to take on Columbia’s Fidel Monterrosa Munoz (39-25-1, 31 KOs) in an eight round non-title fight in Portland Maine in the United States.

Okwiri’s fight is being promoted by Michael Reyes of Reyes Boxing Inc.

The Kenyan 2016 Rio Olympics quarter-finalist is now based in Boston on a five-year managerial contract with Raynelo Management who are partners with Reyes Boxing Inc.

He first landed in Cancun, Mexico for intensive physical conditioning training with Namibia’s Walter Kautondokwa before moving to Boston for sparring camp.

“I liked the physical conditioning camp in Mexico but the hot weather was not favourable for my training. In Boston everything is okay. Promoter Michael has taken good care me, I’m living very well like a champion, I thank Mike for all this and I promise not to let him down on Saturday,” said the 35-year-old Okwiri nicknamed Boom Boom.

Okwiri is not shaken by the record of his Columbian opponent Fidel Munoz who has won 39 fights, lost 25 and drew once. The 33-year-old Columbian fights from the orthodox stance and turned professional in 2006.

Okwiri, a sergeant at Prisons Service, said he’s grateful for the support from his employer.

“The Commissioner General (Wycliffe Ogallo) his deputy Benjamin Njoga and Catherine Ndereba have boosted my morale in every way possible. I appreciate their kind gesture to allow me turn professional and retain my job, I’m still in their payroll.”

The Kenyan southpaw boxer last fought on December 14, 2019, at Nairobi’s Charter Hall, retaining his ABU title by outpointing Augustine Matata from the Democratic Republic of Congo (DRC) in a 10-round fight dominated by Okwiri.

Okwiri has won all his six fights including 4 KOs and one draw since turning professional in  February 4, 2017, when he KO’d Tanzania;s  Salehe Mkalekwa in the Fox Sports Promotion card at Crowne Plaza Hotel in Nairobi. In his fifth fight on June 8, 2019, Okwiri captured the vacant Africa Boxing Union (ABU) middleweight title with a third round KO over Tanzania’s Hussein Itaba at the Charter Hall.

Promoter Michael Reyes is impressed by Okjwiri’s progress so far in training.

“Rayton has been improving every day. He has learned to sit down on his punches and is going hard in sparring,” said Reyes, and went on, “Based on the current middleweight breakdown with great champion I believe Rayton will be in the mix and a top ten in the world by this time next year.”

Okwiri said his burning ambition is to become a world champion before he’s  40 years.

“Between now and 40 I promise my fans I’ll win a world title, that’s my eventual goal in pro boxing, Im capable of doing it judging from difficult opponents I’ve beaten in amateur boxing and in AIBA professional boxing.”

Rayton Okwiri posing after receiving sponsorship for his USA trip.

He said he prefers training in the US because of tough sparring partners unlike in Kenya where he lacks stiff competition during sparring sessions. Some of his sparring partners in the US include WBO champion  Demetrius Andrade who in April this year defeated Britain’s Liam Williams on a unanimous decision to retain his WBO middleweight title in Florida.

Andrade is unbeaten in 30 fights, and is now keen to take on the division’s other champions such as Gennady Golovkin and Jermall Charlo.