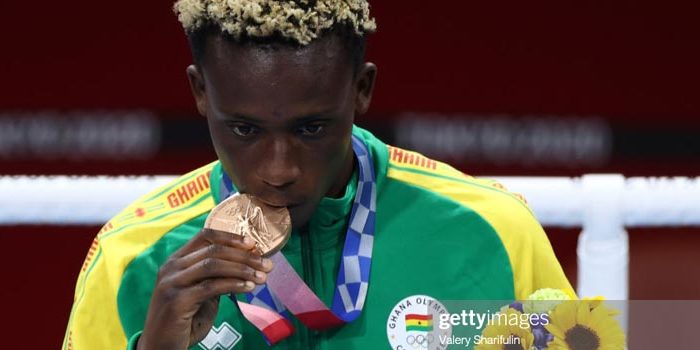 It’s the hot topic in gyms all over James Town, the question on the lips of every mover and shaker in the Ghana boxing scene: Should Samuel Takyi turn pro?

Yet it appears even he is unsure of what  to do.

Two weeks ago, Takyi told Ghana’s TV3, “I and my coach are ready for professional. I have a dream, I have to make it, I am young and I have records to break. We must make it earlier.”

Days later, he recanted. “I had wanted to go professional due to talks in town. But after engaging my team, I will continue with amateur boxing,” he told Happy 98.9 FM.

Some of Ghana’s most respected boxing voices were elated.

“I am happy he has rescinded his decision to turn professional. With professional sports, there are so many problems at the moment,” said Moses Foh-Amoaning, former Ghana Boxing Authority President.

“I will meet his team so we can guide him to be successful. There are a lot of competitions coming up, the Commonwealth Games, the Amateur Boxing League, and the African Games which will help him to get the needed experience before he turns professional.”

Former world welterweight champion Joshua Clottey, who faced some of the finest fighters of his era, agreed.

“I think he should wait and compete at the Commonwealth Games before turning pro because he doesn’t have so many fights as an amateur,” Clottey told BoxingAfrica.com.

“That is very important in becoming a pro because if you have less than 15 amateur fights, you will lack experience when you decide to turn pro. If he doesn’t win anything at the Commonwealth Games, then he should wait and compete at the Africa Games before thinking of the professional ranks.”

Not everyone shared this sentiment. Ike Quartey, also a former world welterweight champion and one of the greatest fighters to emerge from Africa, says Takyi is already proven at the highest amateur level and should turn pro.

“He doesn’t need the Olympics anymore so he has to turn professional because boxing is about age,” Quartey said to BoxingAfrica.com. “He is a big brand now so he must make it count in his career and that is where it all begins.

“He has what it takes to be a world champion but he must work at it.”

This writer agrees with Quartey. Samuel Takyi should turn pro. If he doesn’t, he may regret it.

The logic behind the words of Clottey and Foh-Amoaning is sound. Indeed, many of boxing’s greatest fighters were also great amateurs: Muhammad Ali, Floyd Mayweather, Ray Robinson, Ray Leonard and more.

Yet there is a common thread among these names. Ali turned pro at age 18, Mayweather at 19—as did Robinson. Leonard was 20 when he made his pro debut. So too were 1988 Olympic silver medalist Roy Jones Jr. and 2004 Olympic gold winner Andre Ward.

Takyi is also 20. This is the prime age to turn pro. Sure, there are exceptions, such as amateur standouts Zou Shiming, Guillermo Rigondeaux, and Vasiliy Lomachenko. Shiming was 32, Rigondeaux was several months shy of his 30th birthday, and Lomachenko 25.

In the case of Rigondeaux, the Cuban government disallows boxers from turning pro. Thus, he had little choice but to remain an amateur until he defected.

Lomachenko and Shiming simply opted to wait. However, they were both well compensated by their respective governments for their amateur success. In the case of Shiming, he purportedly earned millions of dollars.

If the Ghana government is willing to pay Takyi that kind of money, he should by all means remain an amateur. More than likely, Takyi will receive slightly more than the average Ghanaian amateur—which isn’t much. Not only will Takyi earn little as an amateur, when he eventually turns pro, it could take him years to obtain a world title shot and just as long to make any significant money.

ON THE JOB TRAINING

There was once a time when Africa’s amateur competitions produced future champions and an abundance of contenders, all refined through a trial by fire.

Today, these events suffer from a dilution of talent due to the lack of national funding. Ghana is no exception. One might even argue that Takyi would gain more valuable lessons in his early pro fights than he would at the Commonwealth Games.

Further, the amateurs aren’t the only avenue to much-needed experience. Saul “Canelo” Alvarez is considered the world’s best fighter, pound for pound, today. The 31-year-old Alvarez has earned close to $150 million to date.

Alvarez was an amateur for all of two years (46 fights) before turning pro at the ripe old age of 15. Julio Cesar Chavez had just 15 amateur fights. Roberto Duran had 16. 1968 Olympic gold medalist George Foreman had only 26.

As for the great Salvador Sanchez? He had a whopping four amateur fights.

These fighters honed their craft as professionals, developing their skills in the gym while taking incremental steps up in class. Properly maneuvered, Takyi can do the same.

Takyi would need a solid plan if he opts to turn pro. Whether he chooses to fight out of Ghana or not, he must surround himself with a team which can provide access to international sparring and training. Without that proper team, he’ll be doomed to failure no matter what he decides to do.

Takyi may wish to take another year to fine-tune his skills before turning pro. But any longer would be a mistake. Shakespeare once said, “Better three hours too soon than a minute too late.”  Samuel Takyi, take heed.