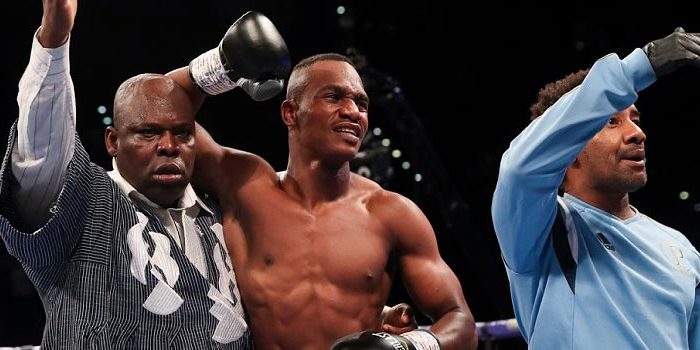 The victory is easily the finest of the 27-year-old Mwakinyo’s career—and he did it in front of his hometown fans at Ubungo Plaza in Dar es Salaam, Tanzania.

Mwakinyo (20-2, 14 KOs) got off to a hot start in the first, bringing the fight to Namibia’s Indongo. But the 38-year-old Namibian weathered the storm and came out attacking in the second and third. Even so, much of his volleys landed safely on Mwakinyo’s watertight guard.

The tables turned in the fourth. Mwakinyo began to let his hands go, landing combinations on Indongo with alarming frequency. With Indongo losing control of his legs and Mwakiny merciless in his assault, referee John Chaggu stepped in and saved the former unified world champion from further punishment.

Mwakinyo is now primed for the next step in his career, moving closer to world title contention. As for Indongo (23-4, 12 KOs), he has now lost four of his last five, all four losses coming inside the distance. No word yet on whether he will continue to fight or hang them up.

In the co-feature, South Africa’s Bongani Mahlangu dethroned incumbent Tony “AK 47” Rashid of Tanzania, stopping Rashid in the 12th round to capture the ABU super bantamweight title in a shocking upset.

Rashid, a product of Amoma Boxing Academy in Dar es Salaam, was in the driver’s seat for the better part of the fight against his back-peddling opponent. At one point, Mahlangu was warned by the referee for excessive movement and urged to fight. The South African obliged in the 12th, charging at Rashid and punishing him with flurries.

A strong right cross sent Rashid crashing to the canvas as his hometown fans watched in horror. He was still wobbly when he arose and Mahlangu was unrelenting, wailing away until the bout was halted.

The seven-bout card was promoted by Amos Nkondo of Amoma Promotions. He is also the coach of Amoma Boxing Academy.