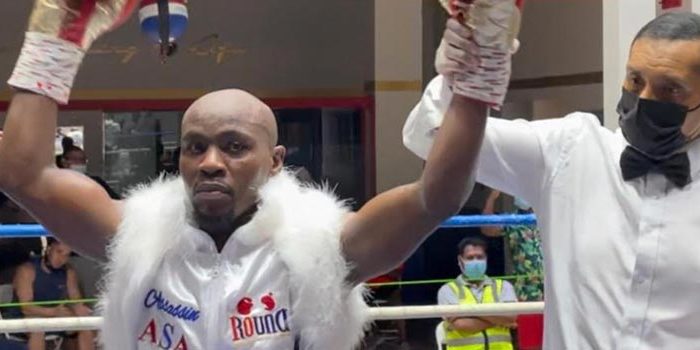 The Dubai-based Mwangi (9-3-1, 6 KOs) is a last-minute replacement for Pakistan’s Muhammad Bilal who withdrew for reasons unknown.

Dekwal, 26, 10-0 (6 KOs), is widely considered India’s top lightweight boxer albeit one who hasn’t been seriously tested yet. Dekwal arrived in Dubai Friday morning ahead of Saturday morning’s weigh-in. The 33-year-old Mwangi represents his stiffest test to date.

“I thank God for giving me this golden chance to fight for my first title,” Mwangi told BoxingAfrica.com. “I’ve trained very well under my Filipino coach, Robert Etorma. I want this title badly. My Indian opponent should be ready for a KO. I have no time to waste with him.

“Today (Friday) I signed the contract, went through medical tests, including brain scan as per WBA requirements. As much as I’m confident, I’m not underrating my opponent.”

Mwangi, who is signed to D4G management in Dubai, last fought in July, scoring a sixth-round TKO over Ghana’s Daniel Ankornu in Ankornu’s native Accra. In doing so, he became the first East African pro boxer to win in the West African country.

Mwangi began boxing at the age of 11 in Ruiru after being inspired by Kenya’s legendary two-time Olympic medalist Philip Waruinge and Olympian Benson Gicharu.

In 2007, he joined Prisons Boxing Club and the following year  was the runner-up in the novice championships.

After unsuccessful attempts to be recruited by Prisons, Police and Kenya Defense Forces, Mwangi moved to Dubai in 2012, joining Round 10 Boxing Club. He turned pro in 2013 and made his debut in the bare-chested game in 2015.

Now he fights for his first title in the show, which is set to begin at 6 p.m. Dubai time.