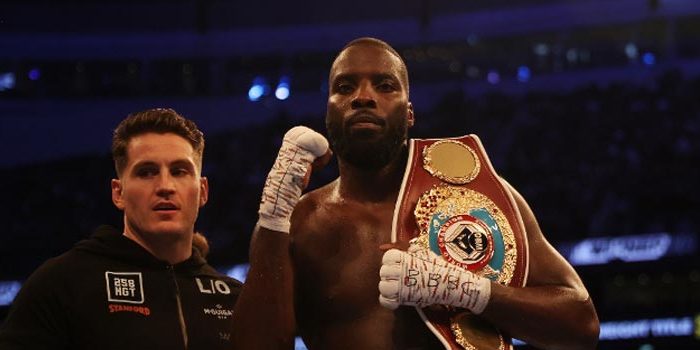 Lawrence Okolie made predictably easy work of Dilan Prasovic in the first defense of his WBO cruiserweight title on the Joshua-Usyk undercard.

Prasovic was the mandatory challenger and unbeaten, but nothing on his record suggested he was a threat to the impressive Okolie, who knocked him out in the third round.

The challenger wasn’t afraid to come forward at Okolie, although he tended to overstretch in his shots. Okolie couldn’t land cleanly in the opener, though, as the Montenegrin presented a moving target,

Late in the second round, a right on the side of the head stiffened Prasovic’s legs and he went down to the floor as Okolie landed a follow-up right.

After he rose, Okolie landed another heavy right as he went for the finish, but Prasovic took it well and then held.

Prasovic was merely clinging on for survival in the third round, but after he ducked under one huge right, Okolie dropped him with a left to the body and was counted out by referee Steve Gray at 1:57 of the round.

Okolie has targeted a string of unification fights before ultimately moving up to heavyweight.

“I’m extremely happy to get a win in front of all these amazing people,” Okolie said. “I grew into the fight, it’s difficult against guys like that who come a little bit cagey. I need the big names to get the best from myself

“One hundred per cent [I want to unify the belts], the better the person is in front of me, the better my performance. This guy was trying to spoil, other guys will be trying to win.”