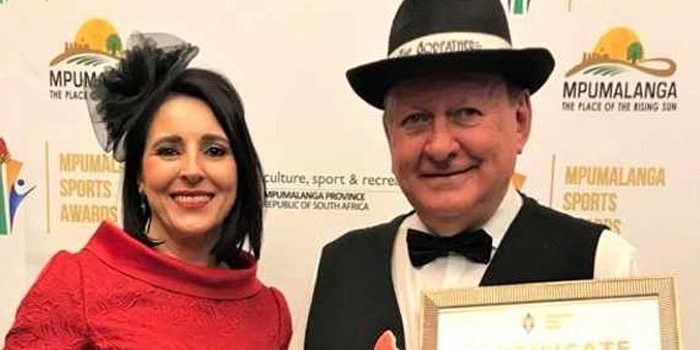 Legendary boxing promoter Thinus Strydom who has been promoting the ‘sport of kings’ for more than 40 years chalked up another accolade after being honoured as a sporting legend at Sunday evening’s Mpumalanga Sports Awards (MPSA) in Mbombela.

The MPSA, in collaboration with the Department of Culture, Sport and Recreation, honoured several sporting legends who brought fame and to the province and the country through their achievements. Some legends excelled as coaches, administrators and promoters.

Strydom has over the years been honoured by several world boxing organizations and has lifted several ‘Boxing Promoter of the Year” titles. He also promoted tournaments abroad.

Arguably the stand-out feature of Strydom’s involvement in boxing was that he secured a world title shot for the South African heavyweight champion Gerrie Coetzee in 1983 after he negotiated with Don King, the world’s leading boxing promoter at the time.

The controversial King and Strydom shook hands on a contract that gave Coetzee a crack at the World Boxing Association heavyweight title, held by American Michael Dokes at the time. A few days later, King called to say he could not proceed with the bout because he could not find financial backing.

Strydom miraculously secured sponsorship from the South African-based company Defy, which was Southern Africa’s largest manufacturer and distributor of domestic appliances at the time.

The bout proceeded, and against all odds Coetzee, the decided underdog won the title at the Richfield Coliseum, Richfield, Ohio.

On his return to South Africa, Strydom and Coetzee were greeted by SA cabinet ministers at the airport in Johannesburg.

Strydom, during the dark days of Apartheid, was a transformation pioneer. He accommodated visiting black American boxers at his Boksburg home when it was illegal to do so, and he was harassed at his home by police.

Apart from Coetzee, Strydom also guided the fistic fortunes of other world champions like Dingaan ‘The Rose of Soweto’ Thobela and Francois Botha.

Rugby personalities Naas Botha and Heyneke Meyer were among the many sporting legends, who were honoured on Sunday evening.