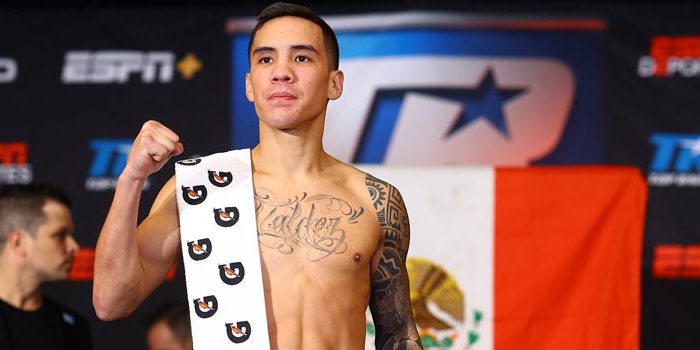 Oscar Valdez has been cleared to fight.

BoxingScene.com has learned that Mexico’s Valdez was approved to move forward with his scheduled September 10 clash with Brazil’s Robson Conceicao (16-0, 8 KOs), which will air live on ESPN+ from AVA Amphitheater at Casino del Sol in Tucson, Arizona. The bout was previously in jeopardy due to Valdez having tested positive for Phentermine, as discovered through drug testing as contracted through Voluntary Anti-Doping Agency (VADA).

However, a ruling handed down by the Pascua Yaqui Tribe Athletic Commission permitted Valdez to proceed with the fight. The argument presented by Valdez’s team—including the claim that the substance in question was discovered during what is deemed as out-of-competition by World Anti-Doping Agency (WADA) code—along with other undisclosed factors was enough for the unbeaten boxer to receive clearance to fight next week.

ESPN.com and ESPNDeportes.com were first to report the development.

Pascua Yaqui Tribe Athletic Commission members have previously declined comment on the topic, nor have returned messages from BoxingScene.com seeking comment. Representatives from Top Rank and Espinoza Boxing—Valdez’s promoter and manager, respectively—were not in a position to comment as this goes to publish. A joint statement is expected to address the event as a whole.

Phentermine—a prescription-based weight-loss supplement—is only banned during in-competition by WADA, with that period beginning 12:00 a.m. the day of the fight. VADA does not differentiate between in- and out-of-competition, with all its listed substances considered to be prohibited at all times. Most commissions adhere to WADA ruling, although the WBC’s Clean Boxing Program adheres to VADA rules, although the independent testing agency does not have the power to adjudicate but simply report results.

The matter came into question late Monday evening, when all involved parties were alerted of an adverse finding in Valdez’s “A” sample from a test collected August 13. The sample showed trace amounts of Phentermine, which Valdez’s hired attorney Patrick English argued was low in concentration and potentially ingested through “an innocuous herbal tea.”

An emergency meeting was held Wednesday morning, featuring the Pascua Yaqui Tribe Athletic Commission, English—representing Valdez—and representatives from Top Rank who met for nearly two hours to discuss the matter. Upon the conclusion of the meeting, it was determined that Valdez called for his “B” sample to be tested, which comes at the cost of the athlete. The case was expedited, with the result coming back Thursday and upholding the finding in the “A” sample.

Despite both samples showing proof of the substance deemed prohibited by VADA, the commission opted mere hours later to rule in favor of Valdez.

The August 13 test was the only collected sample known to produce evidence of the substance in Valdez’s system. Another sample collected August 30 came back negative. The dates of any other tests conducted during the enrollment period for Valdez and Conceicao are not immediately known. VADA does not publicly disclose test results unless authorized and specifically instructed.

Valdez and Conceicao were both welcomed into VADA testing July 21, seven weeks out from their scheduled fight. Neither has previously tested positive for a banned substance, with VADA testing in place for Valdez’s signature win of his career—a tenth-round knockout of Miguel Berchelt to win the WBC junior lightweight title February 20 at MGM Grand Conference Center in Las Vegas.

While the commission has cleared Valdez, a definitive ruling has not been made public as to whether the WBC will still sanction the fight. The Mexico City-based sanctioning body previously announced that an independent investigation is underway, with its own ruling expected in the coming days. Efforts by BoxingScene.com to contact the sanctioning body seeking comment went unreturned as this goes to publish.

Should the bout proceed as a title fight, it will mark the first defense of the 130-pound belt for Valdez (29-0, 23KOs) who fights in his childhood hometown for the first time in nearly four years. Valdez—a two-time Olympian for Mexico who lives in nearby Nogales and trains out of Eddy Reynoso’s facility in San Diego, California—last fought in Tucson in September 2017, training knockdowns with Genesis Servania in scoring a twelve-round decision win to defend his WBO featherweight title.

Valdez made six overall defenses of the WBO featherweight belt before moving up in weight in 2019.

A ruling by the WBC to allow the fight to proceed with the belt at stake will represent the first career title attempt for Conceicao, a three-time Olympian for Brazil. The unbeaten 5’10” contender became the first boxer from his nation to win a Gold medal, doing so in his home country during the 2016 Rio Olympics.

Thursday’s ruling comes as a shock to most in the industry, though with precedence. Francisco Vargas was forced to appear before the California State Athletic Commission to explain how he tested positive for Clenbuterol ahead of his June 2016 clash with Orlando Salido, which carried the very same WBC junior lightweight title at stake. Vargas tested positive for the banned substance through VADA testing, which he attributed to tainted meat consumed while at his mother’s house in Mexico.

Vargas was immediately moved to California for the remainder of his training camp, as he was cleared by the California commission on the condition that he submit to its own random drug testing for the duration of the pre-fight period and through fight night. Vargas tested negative the rest of the way, proceeding with the fight with Salido which ended in a draw after twelve furiously fought rounds.

England’s Billy Joe Saunders was unsuccessful in arguing WADA code in his positive drug test result which cost him the WBO middleweight title. The British southpaw was unbeaten at the time of his scheduled October 2018 WBO middleweight title defense versus mandatory challenger Demetrius Andrade in Boston, Massachusetts. The bout was in jeopardy after Saunders produced a positive sample for the VADA-banned substance Oxilofrine, which he attributed to ingestion through a nasal decongestant.

Saunders also argued that the substance was discovered during an out-of-competition period, as recognized by United Kingdom Anti-Doping (UKAD)—to which all boxers are required to submit to random testing—and the Massachusetts State Athletic Commission (MSAC). However, the MSAC sided with the rules as defined by VADA code, also citing its familiarity with the substance through rampant usage in both Major and Minor League Baseball, denying Saunders a license which cost him the fight.

It also prevented his ability to honor a mandatory title defense, to which Saunders agreed to relinquish the belt in lieu of being stripped.

Valdez’s situation was different in that regard. His fight with Conceicao—if still approved by the WBC in light of recent test results—is a voluntary defense, with a mandatory challenger not yet identified by the sanctioning body at the weight.

Regardless of how the Pascua Yaqui Tribe Athletic Commission was going to rule on the matter, BoxingScene.com has learned that the event was likely to move forward although unaware of a contingency plan—if any—that was in place. The show includes another junior lightweight matchup between unbeaten contender Gabriel Flores Jr. and Luis Alberto Lopez, along with Japan’s Junto Nakatani (21-0, 16KOs) in his first WBO flyweight title fight and U.S. debut versus former WBO junior flyweight titlist Angel ‘Tito’ Acosta (22-2, 21KOs).