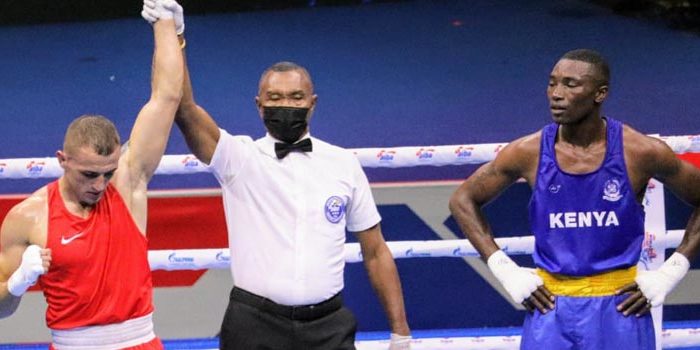 Africa’s lackluster performance in the ongoing AIBA World Boxing Championships continues with dim prospects of featuring in the finals next Saturday, November 6.

A total of 41 boxers from ten African countries entered the two-week championships, including one from Fair Chance Two team, AIBA’s version of refugee participants. By Thursday, October 28, seventeen African boxers had fallen by the wayside.

It all started on the first day, October 25, when all the three boxers lost their fights. Two of them gave away victories on walkovers after arriving late in Belgrade – featherweights Niven Chemben of Mauritius whose opponent from Trinidad and Tobago won on walkover and DR Congo’s Engulu Kayala who was to have fought Omari Jones of the USA. Cameroon’s Jean Ngaah Onana lost his fight via a first-round stoppage.

With that false start, the writing was already on the wall regarding what was in store for the African boxers.

The following day, all the four Kenyan boxers in action, flyweight David Karanja, light welter Victor Odhiambo, light heavyweight Cosby Ouma and heavyweight Joshua Wasike, all lost their fights. Karanja was the most impressive among the four Kenyans, dropping a 4-1 points defeat to Ecuador’s Luis Delgado in what Kenya team members felt was not a fair decision given that Karanja stood toe-to-toe with Delgado giving in as much he received. All the four were making their debut in the world championships.

Day three of the world championships was a further disaster as nine of 10 African boxers lost their fights. England-based DR Congo’s cruiserweight Christopher Luteke was the sole African who won, scoring a unanimous decision over Nalek Korbay of Venezuela.

Okoth, a gold medalist in the 2017 African championships, was soundly beaten on points by Dominican Republic’s southpaw Alexy Dela Cruz in the lightweight division. Cruz outsmarted the Kenyan boxer, piling on points on the retreat as Okoth engaged in a wild goose chase, unable to contain the swift moving Dominican who finished ninth overall in the featherweight division at the Tokyo Olympics.

There was no respite for the African boxers in day four of the global boxing event. DR Congo’s featherweight Nkosi Lutaka and Abdule Fawan Aborode of Fair Chance Two team were the only winners out of the nine African boxers in the ring. Lutaka outpointed Kenya’s Martin Oduor while Aborode scored a split 4-1 points win over Anthony Joseph of Trinidad and Tobago.

The losing trend continued on the fifth day with all the three African boxers, highly regarded Merven Clair of Mauritius, Kenya’s 2019 African Games silver medalist Shaffi Bakari and Mali’s Abdouf Karim Bathily losing on points, and on Saturday, October 30, Kenya’s two remaining boxers in the tournament, middleweight Edwin Okong’o and minimumweight Martin Maina, were also beaten, ending their hopes of making an impression having entered a full team of 13 boxers. Maina’s defeat to Tajikistan’s Yauheni Karmilchyk was disputed by the Kenyans who felt their boxer had done enough to win the fight. The southpaw Maina, who was making his international debut, showed a lot of promise and looks destined for bigger things ahead.

At the time of writing, two African boxers, both from DR Congo, bantamweight Katamba Kabango and cruiserweight Christopher Luteke were scheduled to participate in the last 16.

Since the inauguration of the world boxing championships in 1974 in Havana, Cuba, Africa has won a total of 23 medals – four gold, four silver and 15 bronze medals. The four gold medals have come via Uganda’s Ayub Kalule in 1974 at light-welter, Kenya’s light-flyweight Steve Muchoki, Nigeria’s lightweight Davidson Andeh all in 1978 and Morocco’s Mohammed Rabii in 2015.