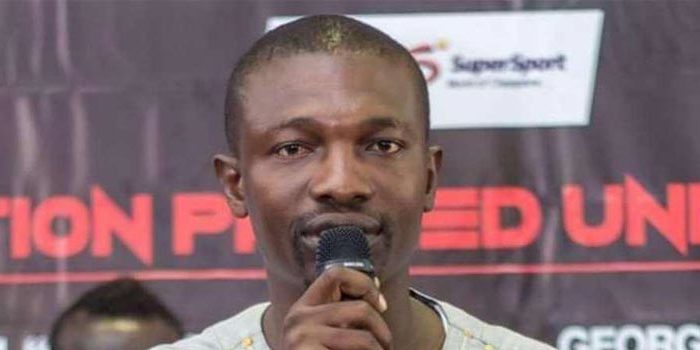 Ghana boxing fans may recall the Robert Quaye-Nathaniel Nukpe card headliner from that night but few knew that the squabble outside the ring carried far greater impact.

Eyewitnesses spotted Ntiamoah having an altercation with GBA President Neequaye and other GBA Executive Board members. One eyewitness told BoxingAfrica.com that the two sides were arguing over the national title belt which was on hand for the co-feature bout featuring Holy Dorgbetor and Success Tetteh, who were battling for the national featherweight title.

Neequaye has confirmed this story to BoxingAfrica.com.

“The Board met with Alex to ask him why he attacked us for not allowing him to take the national title along with him to Akropong for the Odwira Boxing Night,” Neequaye said.

“After taking his statement, the Board has decided to hand him a GH 5,000 fine. He must also write a letter of apology to the entire Board for his actions. Failure to do so would force the GBA to come out with a ban.

Ntiamoah and Neequaye’s feud took place during a well-attended card organized by ACE Power Promotions. Ntiamoah approached Neequaye to request that he take the belt with him to Akropong in the Eastern Region to decorate the winner of Musah Rahman Lawson and Bernard Ayitey Tagoe’s national super welterweight championship to mark the Odwira’s festival.

This was necessary because, due to lack of funds, the GBA has only one physical belt for the national titleholders in all divisions. Once a fighter wins a national title, they pose for photos with it but must return it to the GBA immediately as they use it for other bouts.

But the incident became messy when Neequaye refused to hand Ntiamoah the belt.

“I spoke with Ntiamoah in the morning when I went for the national title and he informed me that he would need the belt after the ACE Power Promotions card to take along to the Odwira Fight Night,” Neequaye narrated to BoxingAfrica.com.

“I later realized that the Odwira Fight Night was being promoted by a week-old promotional outfit. So, the Board decided to refuse allowing a new promoter to have a national championship as its first show so I didn’t give him the title and that led to the attack.”

Ntiamoah downplayed the fracas with the GBA President, stating that they have a good relationship.

“I don’t want to talk about the whole incident because I feel it was a misunderstanding between us and it has been resolved,” said Ntiamoah.

“The President didn’t know that the fight had been sanctioned and that is why he refused to give us the national title but we don’t have any personal issues and we are ready to move on to continue supporting the sport.”

Nevertheless, one eyewitness believes part of Ntiamoah’s anger at being rejected is due to his stance that the GBA would not even have a belt if not for him.

According to sources, Ntiamoah was able to prove that he purchased the national title belt in use when he met the GBA’s Executive Board on Thursday, October 21.

“That assertion is false because as far as I know, the current title was donated by Baby Jet Promotions and no one else that I know of,” said Neequaye.

“But in any case, must you just call the president to give you a title for a show just because you bought it? Does he rightly own it? I don’t think so and some of these things must not be encouraged by the GBA.”

No word yet on whether Ntiamoah will issue the apology and pay the fine. Stay tuned for further details.