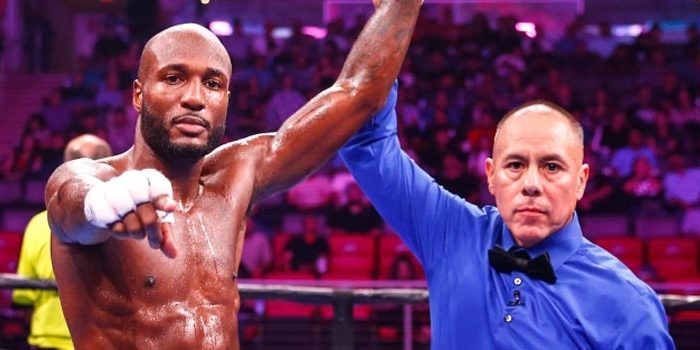 Nearly two years after a knee injury led to his only loss, Darwin Price rejuvenated his career Saturday night.

Price upped his record to 18-1 and recorded his 11th knockout. Torres, who is promoted by Floyd Mayweather’s company, slipped to 19-1 (15 KOs).

The 32-year-old Price’s victory enabled him to overcome a fifth-round, technical-knockout defeat to then-unbeaten Malik Hawkins in December 2019. Before he suffered a knee injury during the fifth round, Price had won each of the first four rounds on all three scorecards versus Baltimore’s Hawkins (18-1, 11 KOs) in a fight Showtime televised as part of the Gervonta Davis-Yuriorkis Gamboa undercard at State Farm Arena in Atlanta.

Price was sharp again Saturday night against an unbeaten but largely unproven opponent.

A ringside physician examined Torres before allowing him to start the sixth round. Price landed short shots inside as an open Torres pressed forward, with his hands down, during the sixth round, but Price couldn’t hurt him in those three minutes.

Mora warned Torres for a low blow at just about the halfway point of the fifth round. Torres managed to make that round competitive, but Price’s punches seemed to have more effect than Torres’ shots.

Torres backed up Price for much of the fourth round, but Price was effective to Torres’ head and body at times in that round.

Torres got off to a strong start early in the third round, when he got good extension on a right hand that appeared to affect Price. Less than a minute later, though, Price landed a right hand that knocked Torres to the canvas.

Boxing off his back foot, Price continued to succeed by landing head and body shots while avoiding many of Torres’ punches during the second round.

Price buckled Torres’ knees with a right-left combination that connected just before the midway mark of the first round. Price’s activity and hand speed troubled Torres throughout that round.