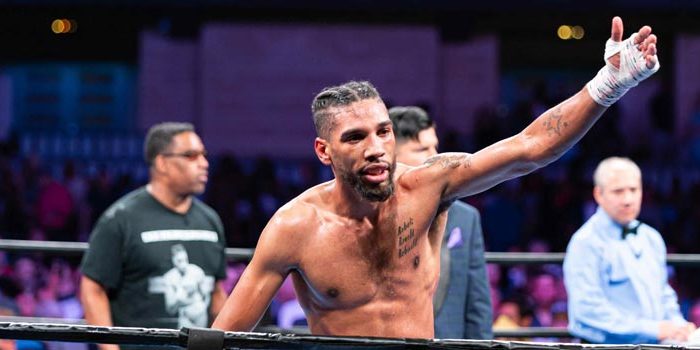 WBA Welterweight Champion Jamal “Shango” James will look to move one step closer to the very top of the welterweight division when he takes on unbeaten contender Radzhab Butaev in a matchup that headlines action live on SHOWTIME Saturday, October 30 in a Premier Boxing Champions event from Michelob ULTRA Arena at Mandalay Bay Resort and Casino in Las Vegas.

“I’m looking to make a big statement in this fight,” said James. “This will be my first title defense and my first time fighting on SHOWTIME and in Las Vegas. My whole mindset is to come out and show out, so that everyone knows I’m a major player in this division. I have to prove to everyone why I deserve the biggest fights.”

James continued his ascent up the 147-pound rankings in his last fight in August 2020, when he out-boxed Thomas Dulorme to capture his title. With the title win, James was set to take on his mandatory challenger in Butaev, allowing James ample time knowing who his next foe would be.

“We’ve known that Butaev is the opponent for a while, so we’ve been training for a long time and I’ve been in great shape all camp,” said James. “We’re just working on our different tools and perfecting them for the fight ahead. We know that everyone is coming for us since I have the title now, so I’m just doing whatever I have to do so that I’m ready on October 30.”

The unbeaten Butaev was an amateur standout before turning pro in 2016 and quickly rising up the welterweight rankings. Trained by Joel Diaz, Butaev most recently knocked out Terry Chatwood in December 2020 to officially set up his showdown with James. While James anticipates his opponent trying to negate the height advantage he brings to the ring, he’s confident in his boxing ability making the difference on fight night.

“Like any other fighter, Butaev has two arms, two legs and a head,” said James. “All of these guys are coming with their A-games. He has strengths and weaknesses just like anyone else. I know he’ll come in there strong and try to test me. He’ll probably try to get inside on me. It’s my job to out-box him and beat him.”

The Minneapolis-native has developed a strong following in his hometown, filling up The Armory in downtown Minneapolis four times between 2018 and 2019, a run that included exciting victories over contenders Abel Ramos and Antonio DeMarco. Training out of the Circle of Discipline gym, James has led the charge in a Minneapolis boxing renaissance, which continues to motivate him even as he hits the road and prepares to fight in Las Vegas for the first time.

“Minneapolis and the state of Minnesota in general really has my back,” said James. “They give me a ton of motivation. And the Circle of Discipline is like my extended family. The people here all push me and keep me on task. That’s what makes me bite down a little bit harder in training, because I know all the people that I have behind me and supporting me.”

James is riding a seven-fight winning streak since his lone pro defeat, a decision loss to WBA World Champion Yordenis Ugas in August 2016. He hopes that a victory on October 30 will lead him directly into a rematch against Ugas, or a showdown against one of the other big-name welterweight stars.

“I’d like the rematch with Ugas coming off his big win against Pacquiao,” said James. “He’s fought the top guys and I’ve fought him before, but it was under less-than-ideal circumstances. I’d like to see what a fight between us would look like after both of us have had a full camp. I haven’t been able to get anyone like Errol Spence Jr., Danny Garcia or Shawn Porter yet, and those are the biggest fights in the division. I’d love to face one of those guys that are already considered the best at welterweight so that I can really prove myself.”