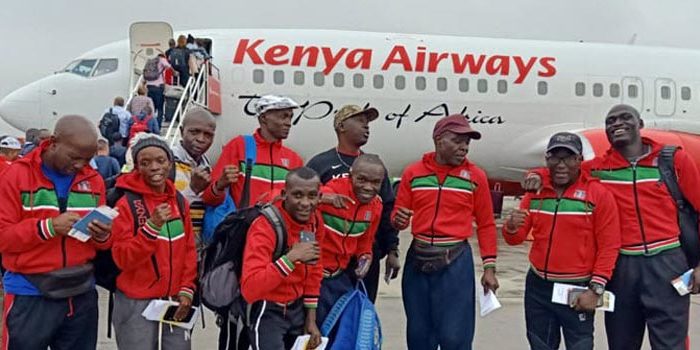 Hope and self-confidence was on the faces of the Kenya Boxing Team that flew to Belgrade, Serbia for the World Boxing Championships that boxes-off on Thursday night.

The team of 13 boxers and seven officials jetted out and flew directly to Doha before connecting to Belgrade for the global championships that commence on October 26 to November 7.

Team captain Nick ‘Commander’ Okoth was confident that they would register the desired results and called on Kenyans to pray for them.

“We are good to go and determined to register positive results at the global championships, a showpiece that will equally prepare some of us for the Commonwealth Games next year,” Okoth told Standard Sports.

He said the move by AIBA to offer cash prizes to medal winners has motivated the playing unit to an extent that each boxer feels they are capable to make it to the medal bracket.

Africa Zone Three super heavyweight champion Elly Ajowi said they are heading to Europe to showcase their talents after the 2020 Tokyo Olympics and a host of other international championships they participated in in the past two years.

“We have gone through rigorous training sessions that led us to feature in a number of international championships. Experience in these tournaments will equally be exhibited in the global championships,” Ajowi told Standard Sports.

Okoth and Ajowi are the only two boxers in the squad of 13 boxers who participated in the 2020 Tokyo Olympics.

Okoth said reaching the medal bracket is the ultimate ambition of every boxer in the squad, a statement that was echoed by light middleweight Boniface Mogunde.

“It is our ambition to reach the medal and comeback home with medals and possibly cash awards,” Mogunde said.

Ajowi went on to say “the exposure we have gained in different international assignments have enabled us to improve and increase our confidence in a number of crucial global bouts we have recently taken part in”.

“In the past two years, I have managed to meet some of the world best boxers in a number of crucial assignments that have shaped my career, which could lead me and other bpxers to perform better in the global championships,” said Ajowi.

Head coach Musa Benjamin said he has an experienced squad who have been capped in different international championships and the global championships is an added to them.

“We are taking the tournament to increase their exposure and the exprience earlier gained in the pre and post Coronavirus pandemic period is an added advantage to them(players),” said Benjamin who also coached Tanzania National Boxing Team for the 2014 Commonwealth Games.

The squad is a composition of young and experienced players.

Before their departure, the team was hosted to a dinner party by Boxing Federation of Kenya President Anthony ‘Jamal’ Ombok on Mashujaa Day.

Benjamin confirmed morale was high and all of them(players) were raring to go.

“When a player thinks of financial rewards awarded by AIBA to medal winners, it makes them crazy and all of them are determined to reach the medal bracket,” he said.

He predicted that at least four of his boxers could reach the medal bracket.

The team manager is Steve Oduori, Sospeter Kimuthia, the physiotherapist and Sam Ogeto, the team doctor.