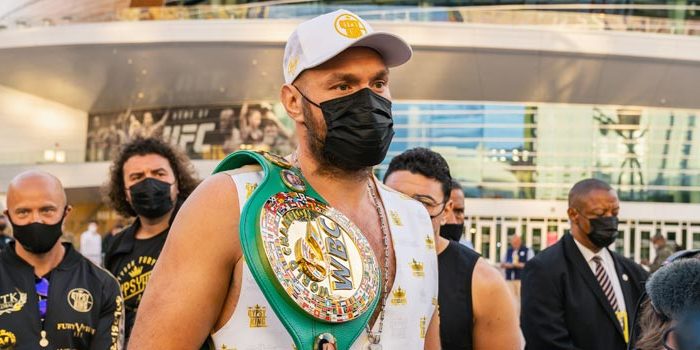 Tyson Fury held his tongue for all of about three seconds Tuesday.

After telling Top Rank’s Crystina Poncher that he hadn’t come to T-Mobile Arena to disparage Deontay Wilder, the gigantic British showman unloaded a barrage of insults on his rival heavyweight. Fury and Wilder never appeared together at their “grand arrivals” outside the building where they’ll fight Saturday night, but Fury shredded the former WBC champion’s character while standing in the same spot Wilder occupied only a few minutes earlier.

“Honestly, I think the guy’s a real piece of sh!t,” Fury said. “He’s a real piece of work, and nobody or nothing will ever change me mind. When we was first gonna fight, I thought he was a decent man, like a family man, you know, doing it for his kids and all that. But now I know he’s a real piece of garbage, piece of rubbish. And I’m gonna knock him spark out on Saturday night.”

The 33-year-old Fury has repeatedly promised to employ the same game plan that worked perfectly for him throughout their rematch in February 2020. The 6-feet-9, 270-pound Fury attacked Wilder immediately in their second bout and relentlessly pressured the hard-hitting knockout artist until it ended.

That persistent pressure led to a knockdown apiece in the third and fifth rounds for Fury. Their rematch wasn’t remotely competitive before Wilder’s former assistant trainer, Mark Breland, threw in the towel during the seventh round to stop Wilder from needlessly taking more punishment.

Fury has accounted for the possibility of encountering an improved Wilder because the Tuscaloosa, Alabama, native will work with a new trainer, Malik Scott, in his corner for the first time. He is still convinced that he’ll tear through Wilder again.

This time, Fury suspects he can make the prideful Wilder quit. He even referred to the legendary welterweight title fight in which “Sugar” Ray Leonard broke Roberto Duran’s will and made the Panamanian icon turn away from him and quit late in the eighth round of their immediate rematch in November 1980 at The Superdome in New Orleans.

“I cannot wait to get him in that ring and give him a good hiding, for sure,” Fury said. “I might even take it slow with him. I might take it slow and punish him, make him say, ‘No mas.’ ”