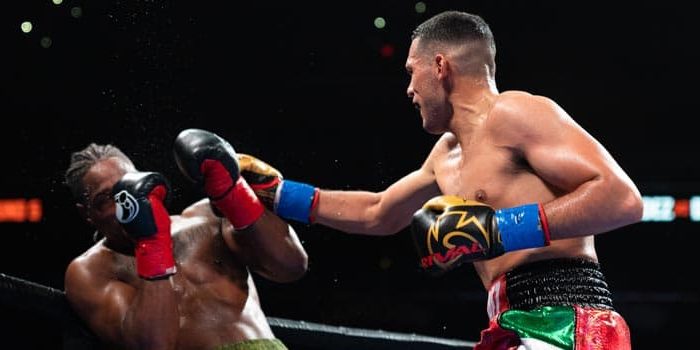 Kyrone Davis bravely tried to fend off the unstoppable beast that was David Benavidez, but his merciful trainer eventually saved Davis from himself Saturday night.

Stephen “Breadman” Edwards, Davis’ head trainer, threw in the towel early in the seventh round to prevent Davis from taking more of a beating against the bigger, stronger, better Benavidez at Footprint Center in Phoenix. Benavidez battered Davis, who is not a natural super middleweight, to his head and body for much of Showtime’s main event, until referee Wes Melton halted the action 48 seconds into the seventh round.

The 24-year-old Benavidez (25-0, 22 KOs) fared much better against a big underdog than his older brother and kept himself in position to fight Mexican superstar Canelo Alvarez early in May.

The unbeaten Benavidez sent his hometown fans into a frenzy by knocking out Davis, who replaced Jose Uzcategui on two weeks’ notice because Uzcategui failed a performance-enhancing drug test. Benavidez entered the ring as a 30-1 favorite, and he dominated Davis accordingly in what was scheduled as a 10-round super middleweight match.

“That was a great performance on my end,” Benavidez told Showtime’s Jim Gray. “A lot of courage by Kyrone, too, man. I respect him a lot, him and his team. Tough dude and he came out here to give the fans a good fight, too. So, we both left it all out in the ring today, so thank you everybody.”

The 27-year-old Davis (16-3-1, 6 KOs), of Wilmington, Delaware, lost by knockout for the first time in seven years as a pro. His previous two losses were unanimous-decision defeats to the late Patrick Day (then 14-2-1) and Junior Castillo (then 9-0) in a 10-rounder and an eight-rounder, respectively.

“I feel OK,” Davis said. “I’m a little disappointed. I wish I coulda pulled out the victory. I don’t like losing. You know what I mean? But it was a hard fight. I came in two weeks’ notice. I said, ‘F** it,’ you know? We’re on Showtime, right? I can cuss? I mean, I said, ‘F*** it!’ So, I said, ‘Let’s work.’ You know what I mean? I said, ‘You know, shame on Uzcategui for being on steroids.’ I had to come in short notice, but you know, I fought like a warrior. I wanna thank David Benavidez for coming in and giving the fans a great show out in Phoenix. I love Phoenix, man. Y’all awesome out here, I swear.”

“Hey listen, this is my guy,” Davis said. “From day one, it’s my guy. I’m upset, but not at him. If he wanted to stop the fight, wanted to protect me, I understand. This is like my second father, pretty much my father. I love him.”

In the main event, Edwards asked Davis before the start of the seventh round if he had one more round in him. Benavidez resumed administering a beating on the out-gunned underdog as soon as the seventh round started, which eventually led to Edwards throwing in the towel.

Benavidez unloaded an array of power punches as Davis laid on the ropes early in the sixth round, but a courageous Davis threw back hard shots of his own to show he wouldn’t go away quietly.

An aggressive Benavidez just kept coming, though, and landed hard head shots up top, mostly with his right hand. Two left uppercuts by Benavidez also landed several seconds prior to the end of the sixth round.

Benavidez drilled Davis with two hard right hands up top with just under 40 seconds to go in the fifth round. Davis landed a left-right-left combination to Benavidez’s body just before the end of the fifth round, but Benavidez tapped at his body and encouraged Davis to throw more shots downstairs.

Benavidez backed Davis into the ropes and unloaded a barrage of power punches on him starting with about 1:20 to go in the fourth round. Davis fired back, though, to keep Benavidez off of him.

Later in the fourth, though, Benavidez blasted Davis, backed against the ropes, with a left, a right uppercut and another left with approximately 20 seconds on the clock. Davis withstood that onslaught and didn’t seem badly hurt from those punches.

A left-right combination by Benavidez made Davis push him backward again, for the second time in as many rounds, with just over 1:20 on the clock in the third round. Davis blocked several of Benavidez’s punches with about 20 seconds remaining the third round, but Benavidez snuck in a thudding left to Davis’ body in that sequence.

Davis backed away from Benavidez throughout the first round, but Benavidez didn’t cut off the ring. Benavidez landed a hard right to Davis’ body with just over 20 seconds on the clock in the opening round.

Benavidez knew, though, that Davis wouldn’t be able to avoid him for too long.

“It was tough, but the thing about me is I have so much condition, bro, that I’m gonna keep going until he eventually stops,” Benavidez said. “That’s what eventually happens – they tend to give up. You know, I know I don’t got that one-punch knockout power, but I’m gonna be ready to get you every single round.”