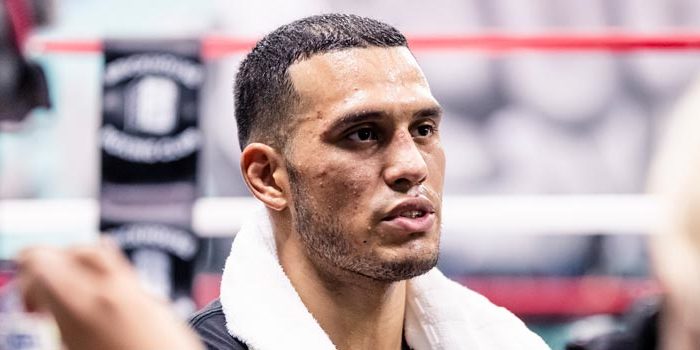 It was the moment David Benavidez was waiting for.

As Showtime’s pay-per-view hosts wound down their broadcast early Sunday morning, they began suggesting foes who might share the marquee the next time the Canelo circus pulls into town.

OK, it was only a two-person list and the 24-year-old shared it with Jermall Charlo, but still.

It was a big moment, nevertheless.

“But it’s just all the work I’ve put in. We’re almost close to making this fight happen. I think especially because Canelo’s on PBC it’s either me or Charlo. So we’ll see what happens.

“I can definitely ask for the fight as much as I can, but at the end of the day it’s up to them. A fight with Canelo is a little bit harder to make happen because everybody wants to fight him. It’s really up to Canelo to make the fight happen. He has a lot of options right now, so I guess we’re just waiting on him.”

Alvarez’s win over Caleb Plant made him a four-belt champion at super middleweight, but Benavidez is quick to point out that one of the Mexican’s newly-earned titles – the WBC version, to be exact – has already been his on two occasions, and he’s never actually lost it in a ring.

Instead, reign No. 1 ended when he was stripped following a failed drug test in 2018, and the second reign ended when he missed weight for a title defense and lost the title on the scales.

So, though his record is a pristine 24-0 with 21 KOs, his championship run only consists of two title wins and one title defense. But if you’re thinking his mindset these days is fraught with lament, think again.

“I don’t have any regrets at all. I feel like I’ve worked hard,” he said.

“Whatever happened outside the ring, whatever happened on the scale, it happens. It happens to a lot of professional boxers. I feel like whatever I’m gone through, everything has helped me at the end of the day. The more experience I get, the better it is for when the time comes for me to get in the ring with Canelo. I’m going to be totally ready.”

Alvarez has said he’ll return to the ring in May.

As for Benavidez, he’ll try to clear what could be his final pre-Canelo obstacle on Saturday, when he returns to his native Phoenix to face fill-in opponent Kyrone Davis at the Footprint Center.

The fight will headline a two-bout card on Showtime that begins at 9 p.m. ET.

It’s his first appearance in Phoenix since 2015 and Davis appears opposite him after would-be rival Jose Uzcategui tested positive for a banned substance and was pulled. As a result, the fight has lost its billing as a title eliminator. But for Benavidez, as it relates to a Canelo fight, it serves the same purpose.

Boxing Scene caught up with the two-time ex-champ as he headed into a Monday training session to discuss his impressions of the Alvarez-Plant bout, how the behind-the-scenes elements come together as a fight is proposed and his approach to the Davis fight with Canelo as a backdrop.

Boxing Scene: Your name and Canelo have been mentioned together a lot lately. I know you want to be next. How are you feeling now that he got his job done and you’ve got one hurdle left to clear?

David Benavidez: First of all, I think it was a really good fight. Hats off to both men. I think both men showed a lot in that fight. Canelo obviously came out the winner. He’s the better man. I’m in a great position because I know the big fight is on the horizon. I’ve just got to keep doing what I’m doing, working hard and keep looking impressive like I have been looking and I think maybe by May or September I can be the next thing that happens. If it doesn’t happen, I’m going to be ready for any opportunity that comes my way. I feel like the people have been asking for it for a long time, for a while because there’s nobody left at 168 anymore. I think I’m the best potential candidate to fight for Canelo because I have good speed, good power and I’m a warrior. I go forward. So I feel like that fights going to happen soon.

Boxing Scene: Why should he pick you? What will make him want to choose you or do you think he’s not going to want to? What makes that fight attractive to him?

Benavidez: It’s not really if it makes it attractive or not. There’s no one else left to fight at 168, especially in PBC. The fans have been calling for this fight for a long, long time. It’s imminent to make happen. Every fighter needs a dancing partner. I’m the next one up. Either me or Charlo, so we’ll see what happens.

Boxing Scene: Does part of you think “Wait, that’s my belt anyway, I ought to get a shot to get it back?”

Benavidez: Exactly. I feel like I’m still ready for it. I’m ready to get that title back. So I remain motivated, I remain hungry and I remain training hard. So whenever this opportunity comes I’m ready for it.

Boxing Scene: Look at Canelo as a fighter and an opponent. What do you notice right away of him at 168?

Benavidez: He’s a strong fighter. He’s definitely an extremely strong fighter. He’s a smart fighter. But the thing about it is I feel like I have the longer reach, I have the longer arms, I’m bigger. Physically. And I’m a big puncher at 168, too. I feel like the guys he’s fought recently; they haven’t been big punchers at 168. I am, definitely. I do a lot of the same things he does – uppercuts, body shots, great jab. So it’s definitely like fighting a mirror once we get in the ring together. It’s going to be a great fight for the fans.

Boxing Scene: You’ve obviously got some work to do beforehand. What do you know about Davis? Do you feel additional pressure?

Benavidez: No. I don’t feel no pressure at all. This is what I love to do. I’ve been working extremely hard for this fight. I’m even more excited that it’s going to be in Phoenix. I haven’t fought in Phoenix in six years so I’m excited to get in there and give the fans a great fight.

Boxing Scene: Do you feel pressure to look memorable or impressive?