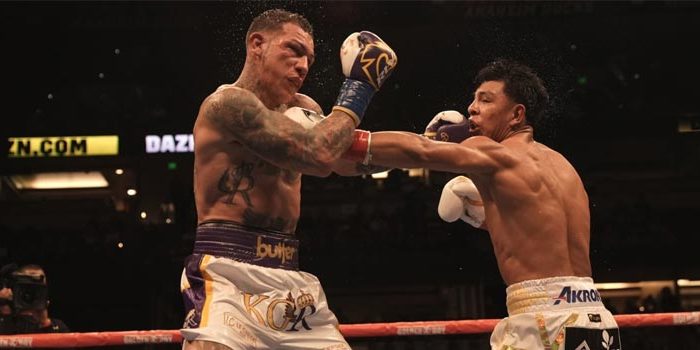 Jaime Munguia and Gabriel Rosado found themselves in their familiar places Saturday night.

Munguia has stated he is eager to face the world titleholders of the middleweight division, while Rosado has paid his dues facing some of the best fighters at 160 and 168 pounds.

Something had to give: Would Munguia prove he belongs amongst the elite fighters at 160 pounds who is worthy of a world title shot or would Rosado again prove to play the role of spoiler as he did in his previous fight?

Munguia, who resides in Tijuana, Mexico, was coming off an impressive win in his previous fight on June 19, stopping former world title challenger Kamil Szeremeta after round 6. He entered the Rosado fight having won his previous four fights by knockout.

Rosado won the opportunity to face Munguia by scoring a highlight-reel knockout over hard-hitting Bektemir Melikuzievon the same card Munguia fought on. In his previous fight on November 27 of last year, Rosado lost a split-decision to former world middleweight titleholder Daniel Jacobs.

Munguia won the first three rounds of the fight by being the more-active and more-accurate fighter, connecting with right hands to the head of Rosado.

Midway through round 4, Rosado stunned Munguia with a right to the head. Rosado followed up, but Munguia battled back, giving way to a back-and-forth exchange that brought the pro-Munguia crowd at the Honda Center to their feet.

Both had their moments in round 5, but Rosado again rallied again in round 6. Moments later, Rosado grabbed onto Munguia, with both losing their balance and falling down onto the canvas. Referee Jack Reiss correctly ruled it a slip on both fighters.

Rosado found success connecting with lead or counter right hands to the head of Munguia, who also landed his share of straight or overhand right hands to Rosado’s head. Rosado played it off on one occasion, punching himself in the chin as if to say Munguia’s punches did not hurt him.

The end of round 9 saw unusual instances that involved Rosado. Moments before the end of the round, referee Jack Reiss stepped in between both fighters, likely due to thinking the round was over. Reiss admonished Rosado for throwing punches, but Rosado claimed he never heard a bell sound to end the round, even bringing trainer Freddie Roach into the ring.

“Tell Gabriel to knock it off or I’ll take a point away,” was what Reiss yelled at Roach.

There was a brief stoppage after the end of round 9 after a defect in Rosado’s right glove was noticed, prompting an immediate switch in a brand new glove.

Rosado rallied in round 10, again landing a series of right hands to the head. A round later, Munguia stunned Rosado with an overhand right that prompted Rosado to hold on. Both fighters had their moments during the final two rounds. Rosado pressed the action in round 12, but Munguia had enough rounds banked to earn the decision win.

Munguia hopes a world title fight can take place next year, including a shot at Gennadiy Golovkin, who will face Ryoto Murata on December 29.

“Rosado was a strong fighter with a lot of experience,” said Munguia, who is co-promoted by Golden Boy and Zanfer Promotions. “He took a lot of punches well. I had to make adjustments in the fight.

“We’re waiting for a world title shot or an elimination shot in the coming year.  (A fight with Golovkin) would be very good. The public would love that one. I’d love it.”