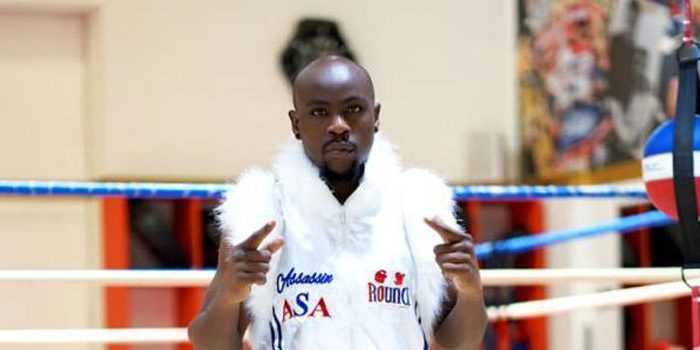 Kenya’s Nick Mwangi has landed an unexpected shot at the vacant WBA international super lightweight title this Friday, November 26, in Dubai. Mwangi (10-3-1, 7 KOs) will serve as a late-substitute opponent as he takes on Britain’s O’Hara Davies (22-2, 16 KOs) in a 10-round bout at the Space Dubai in Doha.

Enter Mwangi, who is now looking at the stiffest test – and the biggest opportunity – of his six-year pro career.

“It’s short notice but I’ve been in camp for almost two months training for the title defense of my WBA Asia lightweight title,” Mwangi told BoxingAfrica.com. “I’m therefore in good condition for this fight then next fight I will defend my title.”

Now he faces Davies who, despite being heavily favored, has not fought in a year. In September 2020, Davies won a razor-thing majority decision over Tyrone McKenna.

“If I win the vacant title, I’ll be ranked among the top 15 boxers for the WBA elimination fight after which I’ll be in line to vie for the world title,” said Mwangi. “I’m really excited.”

Davies was dismissive at Wednesday’s press conference in Doha. “You will feel the weight of punches,” he told Mwangi.

“I just laughed off at his threat,” Mwangi said afterward. “In fact, it’s me who’ll knock him out inside 10 rounds. I’ve watched him fighting on video. He’s a fighter and I’m a boxer and I can also fight. He has a powerful right punch, already I know how I will handle that. O’Hara is a good boxer and has fought good opponents but this does not worry me at all.

“I’m a boxer that’s how I can describe myself. That’s how I’ve been trained and I also have home advantage as most of my fans will be at the venue, including my fellow Kenyans to cheer me up. I can’t afford to let them down.

“I’m also older than my opponent and I believe more experienced despite the fact that he has taken part in more fights than me. I’ll fight in both weight divisions since I’m a champion at 135, and now I want to be champ at 140.”

Mwangi said he has no difficulties fighting in any of the two weight categories.

“Making weight for me has never been a problem. I’m always ready for such challenges because as a boxer you have to be ready for anything and I’ve also done sparring with boxers who are heavier than me.”

Now he gets to put that sparring to test in a bout that could catapult his career.