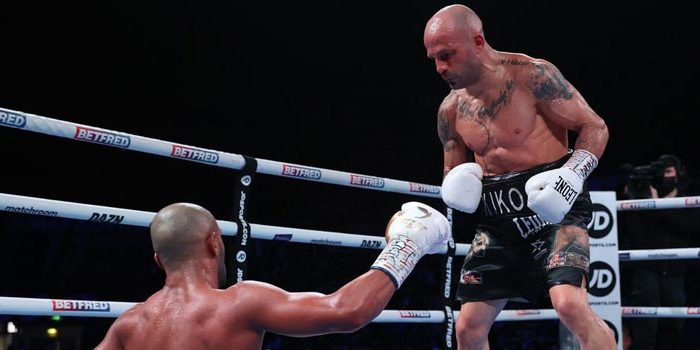 Kiko Martinez produced two huge right hands to knock out Kid Galahad in the sixth round and become a world champion again at the age of 35.

It marked a tough night for British world champions after Terri Harper lost her WBC super-featherweight title to Alycia Baumgardner in the chief support.

Martinez had been a big outsider and many suggested he had no place in a world title fight against Galahad, who had won the title in August.

“It may be a surprise for everyone else but not for me,” Martinez said. “For the last three years I have been living like a monk, I’ve had no holidays, no time with my family, no days off, 365 days of the year I have been working. My wife has helped me a lot with my anxiety, to make sure I keep on top of that but I prepared for this and working really hard for those three years.

“I am now in better shape than ever, better than when I was 20 years of age, I’m more dedicated, I think I have done big things tonight.”

Early on, there were no suggestions that Martinez was about to pull off the shock.  In the first round, Galahad hurt Martinez with a left uppercut and then repeated the trick in the second with a right uppercut.

In the third round, Galahad landed a left from the southpaw stance straight down the middle that rocked Martinez onto his heels. The Spaniard finished the round with a cut over his right eye too.

Martinez put a big effort into the fourth, forcing Galahad back onto the ropes, but Galahad was in control, switching stance and constantly countering Martinez.

Yet the Spaniard was not downhearted and with seconds to go in the fifth round, he landed a huge right hand that dropped Galahad heavily. He beat the count but was on unsteady legs and by the time referee Steve Gray allowed him to continue, there were barely three seconds left in the round.

The minute rest did nothing for Galahad. Instantly in the sixth round, Martinez laid out Galahad with another big right. Gray this time waved it off without a count. The official time was six seconds into the round.

One thing Martinez has always had has been power. He first came to prominence back in 2007 when he wrecked the unbeaten record of Bernard Dunne inside a round in Dublin to win the European title. Many thought he was already past his best back in 2013, when he produced the power again to win the IBF super-bantamweight title from Jonathan Romero in Atlantic City.

He lost the title to Frampton a year later and was then stopped in three world title challenges against Scott Quigg, Leo Santa Cruz and Gary Russell Jr.

It is the second big result for Spanish boxing in a few weeks after Sandor Martin beat Mikey Garcia last month.

Martinez refused to name himself as the best Spanish boxer, saying that belong to former light-middleweight and middleweight world champion Javier Castillejo.

“I’m definitely not [the greatest],” he said. “Castellejo was an idol growing up, he marks a before and after in Spain, so I am definitely behind him.”