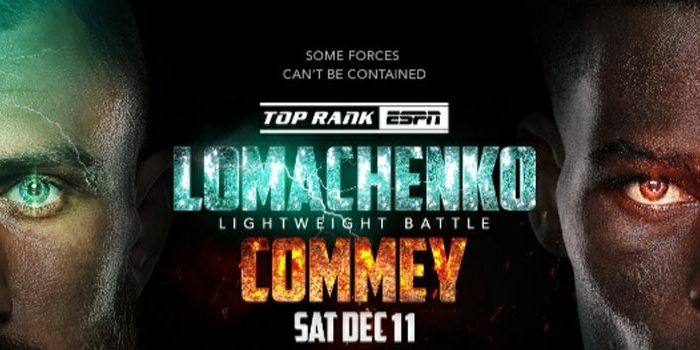 Vasiliy Lomachenko and Richard Commey have both tasted defeat against Teofimo Lopez. The winner of this fight will be at the front of the line to face him for a second time.

Lomachenko will take on Commey on Saturday, December 11, as he makes his return to Madison Square Garden in New York City, the site of some of his most impressive performances. Lomachenko is desperate to win back the world titles that he lost to Teofimo Lopez last year and he’ll be aiming to show that he’s still one of boxing’s best fighters against the heavy-handed Ghanaian.

“It is only fitting that the great Lomachenko headlines boxing’s highly anticipated return to Madison Square Garden. However, Richard Commey can never be counted out, as he’s a tough fighter who carries huge power in both hands,” said Top Rank chairman Bob Arum.

“It is always special when I fight at Madison Square Garden, where so many great moments in my career have taken place,” said Lomachenko. “Richard Commey is a former world champion, an opponent I will not underestimate. I expect the best version of Commey, and I will be prepared for whatever he brings on December 11.”

Commey added, “I want to thank my team of Michael Amoo-Bediako, Lou DiBella, and Keith Connolly for getting me this opportunity. This fight against Lomachenko will get me one step closer to my goal. I know that most people consider me the underdog, but I am aiming to prove them all wrong and make Ghana proud once again.”