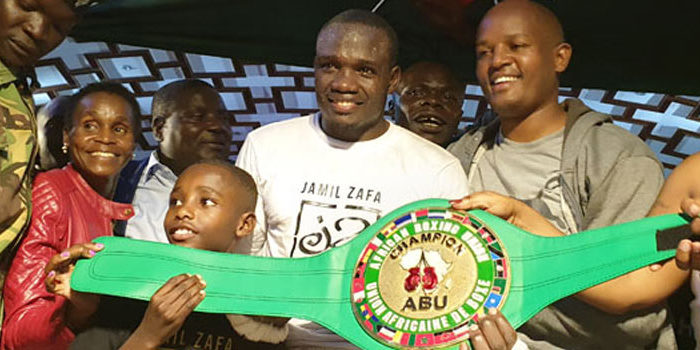 Africa Boxing Union super middleweight champion Rayton Okwiri, his opponent in the non-title fight Enock Musambuzi has bowed out of the battle that was to be hosted in Dar Es Salaam on November 26, 2021.

Musambuzi was said to have demanded huge sums of money in order to face Okwiri who is believed to be the best professional fighter in that weight category in the continent.

A disappointed Okwiri’s promoter Habil Halahala confirmed Musambuzi’s demands as unrealistic, which has forced them to shop for a different opponent.

“We were unable to meet part of his demands for a non-title fight, which to us is unrealistic and has forced us to shop for another willing opponent,” Halahala told Standard Sports from Dar Es Salaam.

As a result, Halahala confirmed that Okwiri will now face Manyuchi who has played 30 professional fights winning 25 (with 15 knockouts), losing four (with one knockout) and drawing one.

“He (Manyuchi) is one of the most refined opponent whom we think could give Okwiri some tough moments before we prepare for him (Okwiri) a continental title fight ahead of a world title fight,” said Halahala.

Okwiri had predicted the fighter would come up with so many demands as an excuse to skip the fight.

“They fear me and this is why most of my opponents have always created roadblocks whenever there is scheduled fight against me but I don’t fear any of them (opponents),” Okwiri told Standard Sports.

The 30 year old Maluchi who is based in Bulawayo started his professional career in 2009 and had his last fight against Muhamad Sebyala in a WBF title fight on July 3, 2021 and won.

Yesterday, Okwiri said he would stop Maluchi through a knockout within the first four rounds in the 10-round fight in Dar Es Salaam next month.

“He (Maluchi) is no match for me and I would knock him out in the first four rounds and I’m confident the match will not proceed to the fifth round,” stated Okwiriu.

Okwiri is in no mood to lose any fight at the moment as he prepares for a world title fight with any of the three top global professional boxing bodies.