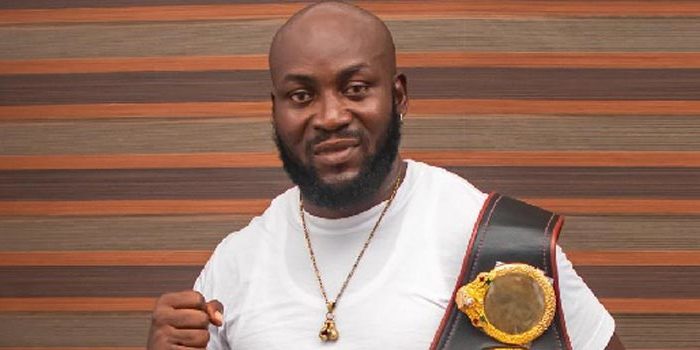 Richard Harrison Lartey and the Ghana Boxing Authority (GBA) are at odds once again.

Last April, the GBA slapped the Ghanaian heavyweight with a five-year ban from fighting in Ghana for allegedly forging a GBA release letter that enabled him to fight in Germany.

As it turns out, Lartey had some more tricks up his sleeve.

According to the GBA, Lartey circumvented their sanction by using a Tanzanian professional boxing license to fight Abdulkerim Edilov in Russia on Wednesday, November 3.

Lartey (14-5, 11 KOs) earned $30,000 for his first-round KO loss to Edilov in an embarrassing display where Lartey seemingly went down from a gust of wind as much as he did a punch.

Now he’s been knocked out again, this time by the GBA, who have banned him from accessing all GBA-affiliated gyms and any activities commissioned by them.

“What he did was fraudulent because you cannot leave Ghana to fight outside with a different country’s license and he must pay for his misconduct,” GBA President Abraham Kotei Neequaye told BoxingAfrica.com.

Replays of the supposed KO blow against Edilov (4-0, 4 KOs) indicate that Lartey might have feigned being so hurt that he hit the canvas. The KO clip went viral on social media, with scores of boxing fans mocking Lartey for his impressive acting ability.

Lartey has now lost four fights in a row. His last two have ended under suspicious circumstances.

Neequaye described this latest performance from Lartey as a “joke.”

“Just look at the performance of Lartey in Russia. It was obvious he just went in for the money without any aim of being competitive,” Neequaye said. “When you watch the replays, it was clear the Russian did not even land a punch but he went down. This is a disgrace to the boxing fraternity in Ghana and we cannot condone it.

“I have to make it clear that he didn’t travel to Russia as a Ghanaian because he used a Tanzanian boxing license for the bout.”

Lartey refused to respond to the allegations by the GBA president.

“I have been advised by my lawyers not to respond to the GBA’s statement at this time and we are looking at coming out with the facts at the right time,” Lartey told BoxingAfrica.com when contacted.

A source with knowledge of what occurred in Russia confirmed to BoxingAfrica.com that Lartey had indeed fought as a Tanzanian against Edilov.

Meanwhile, the GBA has issued a statement on the matter noting that it had written to the Russian Embassy in Ghana and the Russian Boxing Federation regarding the legal implications involved in allowing Lartey to partake in the bout. No response has been received at the time of this writing.

The sanctions may not end there. The GBA wants any of its licensed officials that took part in the bout to meet the Executive Board for questioning.

“He is not going down alone because anyone that participated in the bout must answer questions,” said Neequaye.

“This is because they are all aware of Lartey’s ban and the fact that he didn’t fight with a Ghana boxing license.”