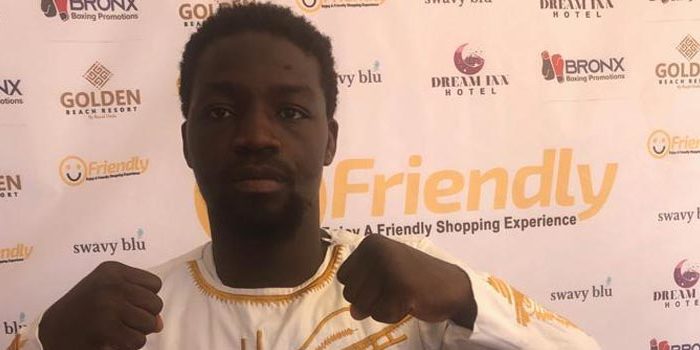 Former Ghana national lightweight champion Sheriff “One Time” Quaye has another opportunity to revive his career.

Promoted by Swavy Blu Promotions, in collaboration with Bronx Boxing Promotions, the bout headlines a card dubbed “The Renaissance.”

“This is a big step in my career and I can’t let it slide without taking advantage,” Quaye told BoxingAfrica.com at a press briefing on Monday.

“I haven’t had the chance to challenge for this title before and I am ready to win it to kickstart my career.”

Samir Captan, WBO Africa Supervisor, asked Quaye to use the bout as a stepping-stone toward his world title dreams.

He also advised boxers to be disciplined and appreciate the efforts of their managers and promoters by giving off their best in the ring.

“This is the biggest opportunity for you to enter into the world ratings and I hope you can grab it with both hands,” said Captan.

“You can’t afford to lose this title if you want to realize your dream of becoming a world champion in the future.”

Quaye trainer Lawrence Carl Lokko said, “This is the time for Sheriff Quaye to shine again on the bill which will have 11 bouts on the card.

“It’s been a difficult career so far with inconsistent results but I believe the time is now for him to redeem himself.”

Quaye is looking forward to a second straight comeback win this year following a painful defeat to nemesis Michael ‘One Bullet’ Ansah in March.

Amos, on the other hand, lost the chance to win the WBO Global super featherweight belt in December 2020 when was knocked out by Jeremiah Nakathila of Namibia.

In the other pairings, George Krampah will face Mustapha Appiah in a featherweight contest; undefeated bantamweight Selassie Gorsh will also be featured on the card against a to-be-determined opponent.

At super lightweight, Emmanuel Quartey will make his pro debut against Amadu Saidu and Moses Adjei will fight a yet to be known opponent in a bantamweight contest.

In a welterweight clash, undefeated Jacob Laryea, alias :Chorkor Fire,” is set to face a yet to be announced opponent.